Without question, the European automotive market is saturated with cars. With brands. With choices.

For consumers, it’s great. For the automakers, it’s a Parisian traffic jam. A struggle to balance economies of scale with shreds of market volume. German brands notwithstanding.

There’s Renault, there’s Skoda, there’s Dacia and Lancia. And Opel and Vauxhall. There’s Peugeot and Citroen. Seat. There’s even Daihatsu. None of these brands are attainable in the United States. Yet there’s no shortage of familiar household nameplates Americans are familiar with. Ford, Toyota, Honda, Nissan, Hyundai… all present and accounted for. And when one experiences the variety first hand on the streets of France, it doesn’t take much thought to wonder why Chevrolet — a French name — is largely folding its cards and shuffling itself out of the European deck, save for the Camaro and Corvette.

Armed with virtually no dealer network and just five models, seeing a Cadillac on the road in Europe is more infrequent than seeing a Ferrari, or an Aston Martin, or a Lamborghini. I know because I was keeping score. Because I was driving a 2015 ATS Coupe 2.0T all over France earlier this summer. 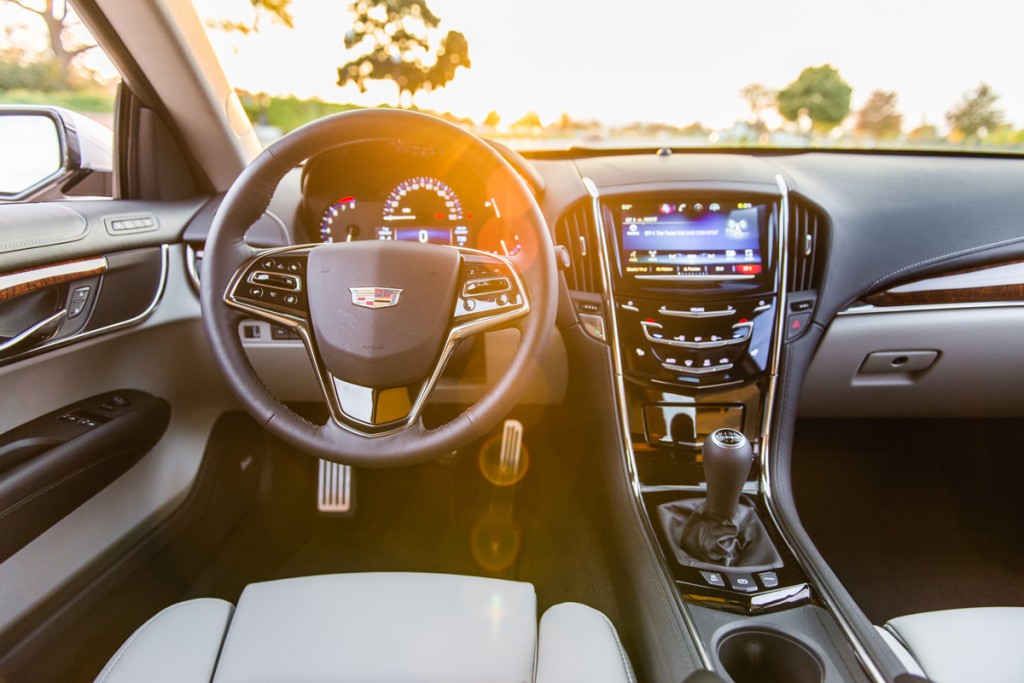 The only other Cadillac I saw was a 2004 XLR in Monaco. In short, Monaco is an ominous principality which was otherwise an opulent sea of Porsche and Mercedes vehicles. But the rarity of what I was driving gave a sense of the angle of exclusivity Cadillac has been pushing for lately. Not that the BMW buyer couldn’t afford one, but because they would really have to go out of their way to acquire one. And if they did, they would own a conversation piece. One that may be given a glance here in America, but not much more. In France — especially during the time surrounding the 24 Hours of Le Mans, which is why I went in the first place — onlookers would point and even double take. Hard to accomplish with a gray C-segment coupe otherwise.

We’re no strangers to the Cadillac ATS family. Through its life-cycle, we’ve spent time in both manual and auto 2.0L turbo models, V6 offerings, as well as slicing and dicing through Road America in the new 464 hp 2016 Cadillac ATS-V. Our Euro-spec model happened to be 2.0T equipped with the six-speed automatic transmission (never mind the manual transmission in the photos, which was a gray ATS Coupe 2.0T from another time).

The lasting impressions among the entire ATS base line for us is as follows: it’s a pretty body with sharp steering and chassis dynamics. The stick shift adds a few numbers to the fun-meter, as does the right interior color configuration (red leather with carbon fiber inserts just drips with sex appeal). The 3.6L LFX V6 remains our favorite engine to choose from even though the manual gearbox is currently only available with turbocharged 2.0L LTG four-pot. It’s important to also mention that European buyers are sadly denied the V6 in the first place.

Otherwise, driving a distinctively American car had me feeling like some sort of ambassador in a country that holds one of the greatest sporting events of the year: the 24 Hours of Le Mans. 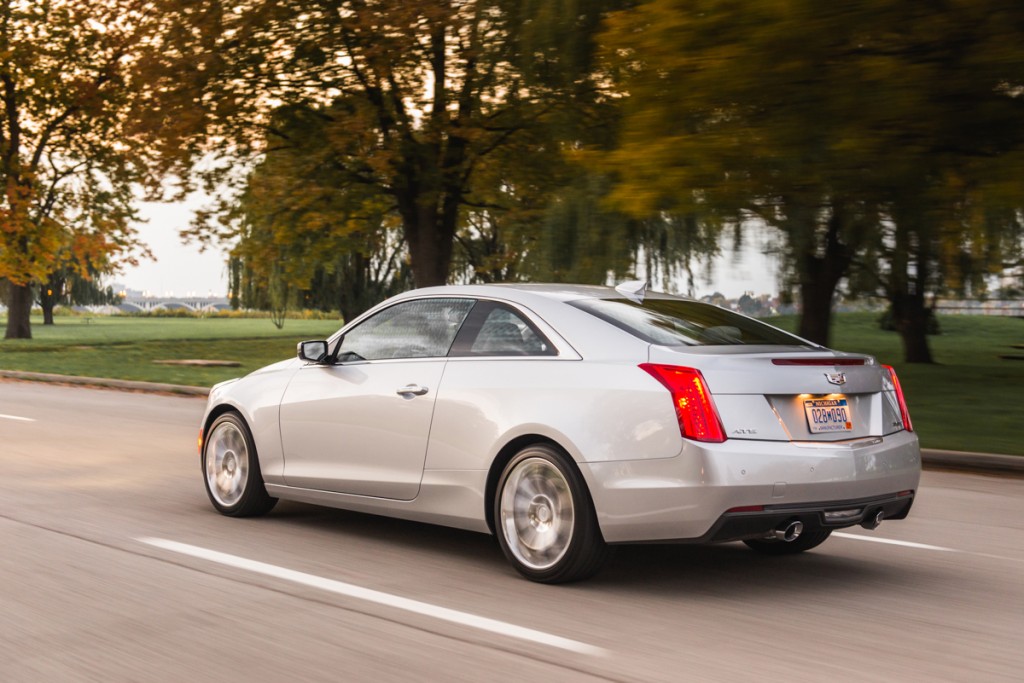 Driving the ATS Coupe from Charles de Gaulle airport outside of Paris to the historic town of Le Mans goes against instinct. It’s Western Europe, therefore I should be using the refined transit systems in place there. If I did, I wouldn’t have had to deal with Paris traffic, or toll roads, or even trying to figure out which direction to go from the airport. Or perhaps I could have at least rented something unobtainable in the United States. Like an Opel Adam, or a Renault Twingo.

I’ll save those experiences for next time. Because out of all of these methods, driving an ATS Coupe on France’s A11 highway with other Le Mans racing pilgrims was perhaps the only way to get the driver of a Porsche 911 GT3 to turn his head in curiosity and amazement. Something he likely wouldn’t otherwise do if I had a more familiar-looking BMW, Audi or Mercedes.

The only noticeable differences of the European-spec Cadillac ATS Coupe compared to what we have in America are the rear turn LED turn signals that emit a yellow lighting instead of red, in accordance to European safety standards. But it’s only made apparent when the indicator is on, as the lamp housing remains red, and looks no different from the North American ATS. Euro safety standards also demand larger side mirrors. Other than that, it’s the Cadillac ATS Coupe we’ve enjoyed before. Therefore, it’s a highly competitive offering to an audience that’s traditionally gone German, with a hardline emphasis on driving performance. 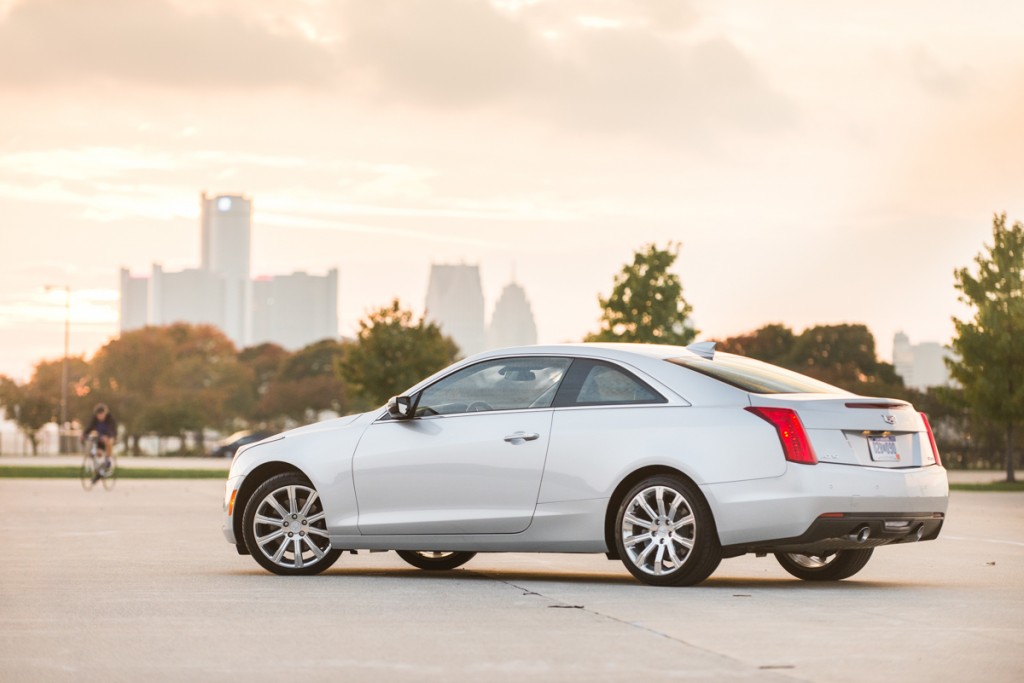 My entire French driving loop totaled several thousand kilometers. From Paris to Le Mans. From Le Mans to the Mediterranean town of Nice. Then from Nice, back to Paris. Over a span of 9 days. Truly beautiful is the French countryside, and it was only made more enjoyable by driving the Cadillac — a brand named after the 1700s French voyageur and founder of Detroit, Michigan. Its balance of size and comfort along with its honed athleticism made it the perfect road trip vehicle for two. We had no troubles fitting six bags of luggage (in other words: two personal items, two carry-on items, and two checked bags) in the trunk, and its luxury vehicle comforts made the hours of driving fly by. Piloting the 20 minutes-worth of whimsical noodling of coastal tarmac connecting Nice to Monaco and back was the driving highlight of this journey, thanks to the ATS Coupe’s chassis tuning, 272 hp/295 lb-ft of turbocharged punch, and Brembo brake pads. The scenery of the Mediterranean and coastal mountain slopes amplified the grandeur, as did a belly full of roast Niçoise  leg of lamb. If you’re ever in Monaco, by the way, go to Monaco Ville (the old town up the mountain that overlooks the yacht harbor), and look for a restaurant called Pinocchio. You will not be disappointed.

Yes, there are quirks, but nothing here that hasn’t been outlined countless times before. Yes, CUE and the instrument panel need to be redesigned to increase their ease of use, and to upgrade visual appeal, respectively. Yes, the 2.0L turbo doesn’t feel as refined as others in its class, and a six-speed automatic transmission feels a generation behind what is available elsewhere today. But above everything else, not having a diesel offering in the European market hurts the most, as filling up a gasoline engine over there makes the wallet burn in agony. Just about every German luxury sedan I observed featured either “TDI,” “BlueTec,” or a “d”-badge. Then again, having minimal dealerships and product offerings in Europe also hurts Cadillac as a whole. But we understand that this won’t be the case in the next five years or so, as brand president Johan de Nysschen has emphasized plans to turn things around with new products, diesel engines and even right-hand-drive models starting around the 2020 time frame.

Until then, Cadillac buyers in Europe will dare to be different. Some may even say, they’ll Dare Greatly.