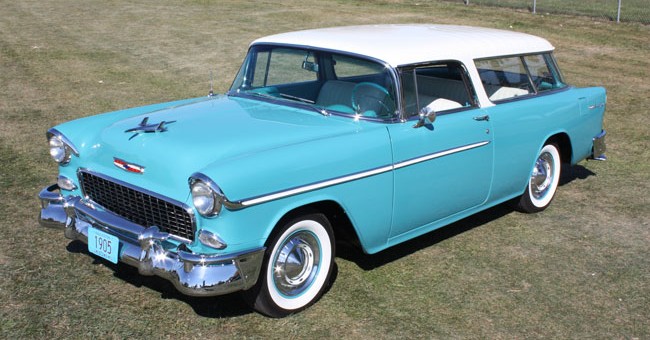 Rivalry is a beautiful thing. Apple versus Android, Coke versus Pepsi, dealership versus dealership, and of course, the unending competition between Ford and Chevrolet.

Rivalry fuels development, and competitors are forced to advance and better themselves in order to get a leg up over the competition. Without rivalry, there’s a distinct possibility Neil Armstrong would never have muttered his eternal words on July 20, 1969. But let’s get back to cars, shall we?

The battle between Ford and Chevrolet has raged for nearly a century, and can be summed up in countless model-for-model skirmishes. A quick look at the race to capture the two-door wagon market in the mid-50s is a quick reminder of just how far rivals will go to win.

Chevrolet introduced the Nomad in the 1955 model year, which took its roots from a show car revealed one year earlier that used the same name, but was based on the Corvette. The two-door wagon that followed (which was not based on the Corvette) was met with critical acclaim and sales success and immediately caused Ford to rush and develop a two-door wagon model of its own.

According to Driving.ca, the Blue Oval raided the company parts bin. It took a base 1956 Ford Ranch Wagon and transformed into a stunning car called the Parklane, complete with chrome trim and accruement from the top-of-the-line Ford Fairlane. Design queues included two-tone paint, unique side moldings, and the Fairlane interior complete with carpeting front to back.

The Ford Parklane Wagon was wholeheartedly embraced and Ford sold 15,816 copies during the single year it was on sale. Meanwhile, in its second year, the Nomad found just 8,386 buyers, falling to the Parklane nearly two-to-one. Part of this came down to price, as the Parklane cost just $2,428, which was nearly $300 cheaper than the base Nomad at $2,707. Don’t forget, that wasn’t an insignificant sum 60 years ago.

However, the skirmish wouldn’t last, as the Parklane was only manufactured for a single model year (replaced by the cheaper Del Rio). Unlike Ford, Chevrolet gave the Nomad a facelift in 1956 and kept the model until 1957, whereupon the Nomad became a top-of-the-line trim level on the 1958 Bel Air.