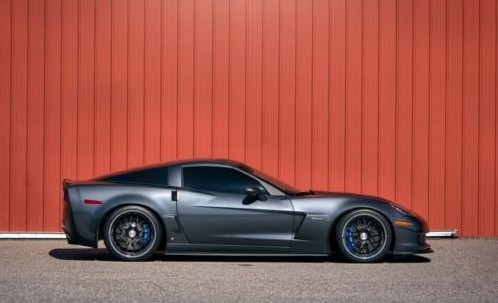 This 2009 Chevrolet C6 Corvette Z06 has been extensively modified and crafted into a vehicle that many could only dream of having. However, relatively speaking, this seller really ain’t asking for much. It doesn’t seem that anyone’s dreams came true, though, as the listing ended and from what we know the car didn’t sell.

The list of performance upgrades done to this Corvette Z06 is quite lengthy, so we’ll give you a few of the ones most worth mentioning. The LS7 was replaced with a Lynch Mob Racing RHS 441 motor loaded with goodies like Oliver rods and diamond-coated pistons. An RPS quad-disk clutch is fitted to the trans along with a carbon-fiber drive-shaft. A custom twin-turbo setup was installed by Vengeance Racing, and features an 11-gallon air to water intercooler. To match the new speed, the stock suspension was replaced with “Phadt single adjustable feather lite coil over shocks and springs along with Phadt race anti roll bars.” We could go on, but by the time you were done you’d have forgotten what you were even reading. You can see the rest of the good stuff on the listing here.

We felt the need to mention the dressed up interior with certain pieces being covered in alcantara to match the Caravaggio Daytona leather seats with alcantara center sections. There are also the exterior upgrades, which include the carbon fiber hood from a Callaway 427 convertible Z06. Our only complaints would be the black wheels with silver lip over the blue brake calipers. We feel that it cheapens the look of the car.

Regardless, we’d certainly love to get behind the wheel of this thing, but would we buy if we had $80 grand? It’s hard to say really. Some of us saw it as a no brainer, a cost effective way of getting an absurd amount of power along with a tastefully modified ‘Vette. On the other hand, some wanted to be more involved with the building of such a car. There was even the idea of possibly purchasing a C3, C5, and C6 for the same amount of money – 3 Corvettes for the price of one.

We’ll take the easy way out of this one and just say it’s all relative. Nevertheless, this Z06 is one sweet ride.