When the Porsche 924 first landed stateside in 1977, the car was lauded for its effortless, neutral handling, and simultaneously derided for its lifeless, neutered engine – that engine being a 2.0-liter unit borrowed from VW/Audi.

Later, the car spawned the Porsche 944, making do with a more acceptable single-cam, 2.5-liter four-pot. That engine then branched-out into a bigger 2.7-liter SOHC unit, two different turbocharged 2.5-liters, a normally-aspirated 2.5-liter DOHC engine, and a bigger 3.0-liter DOHC version. There is precisely no shortage of options with regard to one’s Porsche 944 powertrain of choice.

But what if you’d rather not have any of these? For those discerning folks, there’s always the rather popular route of dropping in a Chevy small-block – like in the car pictured above.

At its best, equipped with the latest 2.5-liter turbo mill, the Porsche 944 Turbo made roughly 250 HP. According to the current owner of this Porsche, his car passes that mark by a good 100 horses. 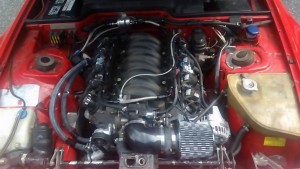 This LS-swapped Porsche 944 is for sale on Craigslist near Reading, Pennsylvania. At $10,500, the asking price is quite modest compared to what you could expect to pay for a well-kept example of the less-powerful 944 Turbo. Powering the car, according to the seller, is a 4.8-liter LR4 from a 2003 Silverado, with an LSA cam, LS6 valve springs, and an LS1 intake, tuned to produce a mighty 300 HP at the wheels.

Assuming a standard 15% or so drivetrain loss, that’s better than 350 HP at the crank.

It’s got some other delightful mods to the exhaust, brake system, and cosmetics – too many to list, in fact. Not designed to cope with so much power, we can only hope that the suspension is included in the list of things modified to suit the engine. Unfortunately, the seller’s rather extensive list doesn’t make note of it.

At any rate, if you want a rather cult-classic 80s sportscar, but you’re just too darn proud to be an American, this small-block-powered Porsche 944 might be perfect for you.