There’s more to fuel economy than just more frugal engines. Aerodynamics play a key part in ensuring a vehicle doesn’t plow through the air like a brick. And plow the 2016 Opel Astra will not.

Precise attention to detail in the roof, C-pillar and underbody accomplishes the engineering feat, and serve as an essential piece to Opel’s latest design language: “sculptural artistry meets German precision.”

“We have made the new Astra more aerodynamic than ever before. The drag coefficient values beat the best values achieved by its predecessor across the board. We gained some important knowledge from the tests we conducted in the ultra-modern wind tunnel of Stuttgart University who we have been working with for many years,” said Reiner Weidemann, Head of the Opel Aerodynamics department. “This helped us make the new Astra the most streamlined compact class car ever produced by Opel.”

Engineers decided to let the roofline flow out gently to the rear to avoid drag, and the rear spoiler has been finessed onto the car, serving as an effective separation edge to cut airflow at the top of the car. And the, arguably gorgeous, C-pillar cuts airflow, too, with small edges splitting the wind in the 2016 Astra’s path.

As for underneath the car, the 2016 Astra foregoes underbody paneling, which it views as unnecessary weight. Instead, Opel engineers took a look at the mechanism and parts, reengineering essential components to ensure air flow was optimized underneath the car.

Combined with the latest generation of EcoTec engines, the 2016 Opel Astra will be the most fuel-efficient and eco-friendly car in its class, according to the brand. And Opel says it’s only the beginning, with a new ecoFLEX model already in the pipeline. 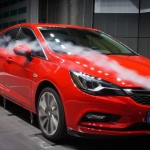 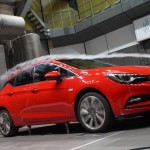 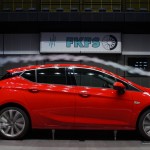 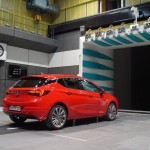 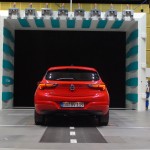 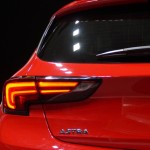