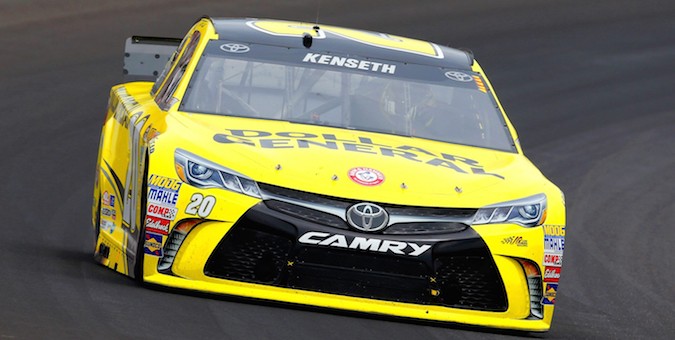 Kyle Busch looked poised to take yet another win during the Windows 10 400 at Pocono Raceway Sunday afternoon, but it was Joe Gibbs Racing teammate Matt Kenseth that ended up in victory lane following a hectic and exciting finish.

Kenseth was in second behind Busch on the final lap as the No. 18 Toyota ran out of fuel near the track’s halfway mark. Busch had taken the lead from Joey Logano just a few laps earlier when the No. 22 Ford ran out of fuel after leading 97 circuits of the 2.5-mile ‘Tricky Triangle’.

The result, which is Kenseth’s second win of 2015, locks the Joe Gibbs Racing driver into the Chase for the Sprint Cup. He and the Dollar General Toyota also won at Bristol in April after earning pole position on the iconic .5-mile oval.

“There’s nothing like wins,” Kenseth told NASCAR.com post-race. “We had a lot of wins in 2013 and were pretty spoiled and last year we had a big dry spell, and this year we were able to win Bristol.”

“We’ve been up front a lot, so just really, really thankful to be with these guys and to get the win. I never thought I’d ever win at Pocono, and I never ever thought I’d win a fuel mileage race, so we did both today.”

“There at the end we were one of the last ones to pit which allowed us to run hard all the way to the finish not having to conserve or save fuel,” said Gordon. “I thought we were trying to get maybe 10th or 12th and all of a sudden they said you’re third, and I think I was probably the most shocked person out there on the race track when I found that out.”

Rounding out the top five was Dale Earnhardt Jr. in fourth and Greg Biffle in fifth. Both Team Chevy’s Martin Truex Jr. and Ford’s Logano were handed down penalties for speeding on pit road after running out of fuel and were thus dropped to 19th and 20th in the final results, respectively.

NASCAR heads to New York state next week for the Cheez It 355 at Watkins Glen International. For full results from the Windows 10 400, click here.