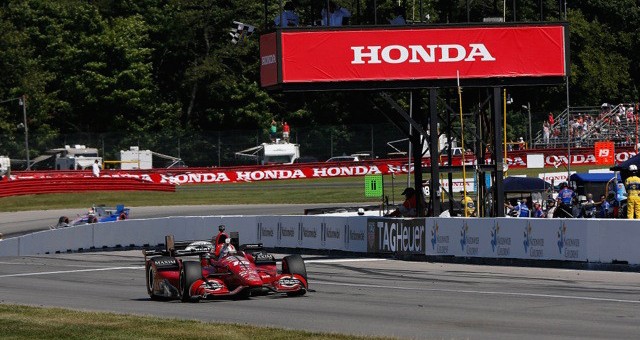 Earlier this year, the Verizon IndyCar Series looked to be a one-sided affair as far as the manufacturer championship went. Chevy was dominating while Honda faltered, however things are starting to look a little more even now, especially after Graham Rahal drove his Steak n’ Shake Honda to victory at Mid Ohio Sunday afternoon.

The win was wildly important for Rahal, who is now just nine points behind series leader Juan Pablo Montoya in the championship standings. The Rahal Letterman Lanigan driver was far from a favorite to win Sunday after being forced to start 13th, however a determined bid for the lead in the race’s second half and a pair of lucky late-race caution flags helped stir the finishing order.

Rahal grabbed the lead on Lap 68 after race leader Montoya and several other front-runners pitted for tires and fuel. He had pitted for his final fuel/tire service just two laps earlier on Lap 66, before Sage Karam put out a yellow flag for running off-course.

On the final restart with just 6 laps to go, Rahal fended off fellow Honda driver Justin Wilson and Team Chevy’s Simon Pagenaud and Scott Dixon to take the win. Former race leader Montoya had fallen through the ranks by this point, crossing the finish line in 11th after starting the race 10th.

Rahal is now the eighth different winner in the nine IndyCar road/street course races held so far this season. With his win and Montoya’s 11th place result, IndyCar has a true battle for the championship on its hands with just two races left in the season.

IndyCar traces NASCAR’s footsteps as it heads to Pocono Raceway next week for the ABC Supply 500 on the 2.5-mile ‘Tricky Triangle’. For full results from the Honda Indy 200 at Mid Ohio, click here.