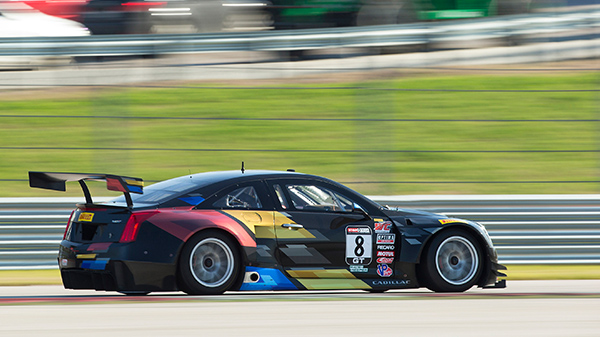 Cadillac Racing were unable to put the ATS-V.R on the podium in this past weekend’s Pirelli World Challenge Stop Tech Grand Prix at Mid Ohio. The double header event saw Ryan Dalziel take back-to-back victories Saturday and Sunday in his Porsche 911 GT3R, just as the British racing driver did at the event last year.

O’Connell and Pilgrim started from sixth and tenth, respectively, for the first of the weekend’s two scheduled races. O’Connell put in a qualifying time of 1:20.591 Friday, the same day Cadillac received GT3 certification for the car from the FIA, allowing it to drop 77 lbs of additional weight as per series rules.

Cadillac noted the drop in weight wouldn’t “rocket the ATS-V.R to the front of the pack,” come Saturday, and they were right. O’Connell managed to gain two positions to cross the finish line in fourth, while Pilgrim failed to finish after making contact with Chris Dyson and the Bentley Continental GT3 in Turn 4 on Lap 22. Dalziel, meanwhile, took the win after battling with James Davison in the Replay XD Nissan GT-R Nismo GT3 for much of the race.

O’Connell and Pilgrim started from eighth and 13th Sunday, respectively, and were able to improve on both those positions. O’Connell crossed the finish line in fifth, while Pilgrim made up three positions to finish 10th. Race winner Dalziel was never challenged for first after starting from pole, despite having to undergo a Lap 2 restart after Chris Dyson’s Bentley Continental GT3 stalled on the front straight.

The Pirelli World Challenge series will head to Miller Motorsports Park in Utah the weekend of Friday, August 21. For Race 1 results from Mid Ohio click here, and for Race 2 results, click here.