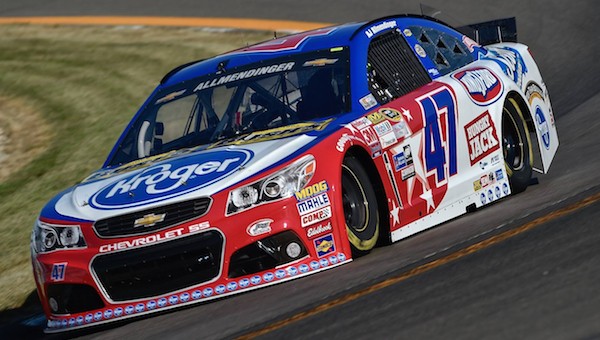 AJ Allmendinger is well poised for a repeat of his NASCAR Sprint Cup Series win at Watkins Glen International last year, scoring pole for the 2015 Cheez It 355 at The Glen with a lap time of 1:08.993 seconds at 127.839 mph.

The result is Allmendinger’s fourth career pole and his second of the season, having also posting the fastest time for the Toyota/Save Mart 350 at Sonoma in June. The road course ace didn’t appear especially strong in Friday’s practice session, however he was the class of the field Saturday, leading both the first and second qualifying sessions.

“It means we lead the field to Turn 1 at least,” Allmendinger told FOX Sports. “I was frustrated yesterday, and I probably didn’t help. I was over-driving and trying to get more than what was there. I didn’t do a good job yesterday, so they saved me and gave me a good race car. Going into (Sunday) I feel happy with what we’ve got, but we’ll see. It’s a tough race. This Kroger’s/Bush’s Beans Chevy is going to be fast and hopefully we’re reliving last year.”

The front of the grid will be littered with Chevys come Sunday, with Martin Truex Jr. posting the second fastest time of the day and Tony Stewart, Kevin Harvick and Jeff Gordon rounding out the top five. More bowties will start close behind them, including Kyle Larson in sixth, Dale Earnhardt Jr. in seventh, Jimmie Johnson in eighth, Austin Dillon in ninth and Justin Allgaier in 12th.

The Cheez It 355 at The Glen will go green at 2:19 p.m. Sunday. NBCSN will provide live coverage of the race starting at 2 p.m., and fans may check in to NASCAR.com for live timing and scoring throughout the race.