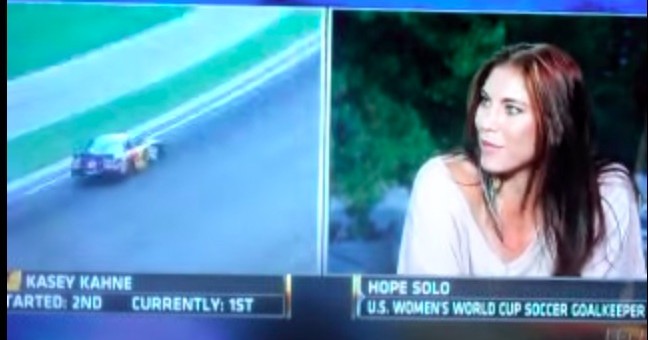 The USA national women’s soccer team has sure got some talent, which makes sense when you’re the first team ever to win the FIFA World Cup three times. In the process, many of the players are celebrities now. Take Hope Solo, for example.

Hope Solo, the team’s ace goalie, is renown enough to have driven the Chevrolet Corvette Brickyard 400 pace car for a lap around the track back in 2011.

Solo said that although it was her first “race,” she had no fear in getting the car up to three-digit speeds. We can imagine how exhilarating the run in the C6 Corvette must have been, but we’re sure it doesn’t come close to how Solo and her teammates felt when they beat Japan 5-2.

Don’t get us wrong, no one is more passionate about cars than we are here at GMA, but we can still be just as amazed by the game of soccer as you are. For instance, Solo’s teammate, Carli Lloyd, scored three goals within 16 minutes during the championship game. She’s the first player to ever do so.

On that note, we’d like to end by congratulating the USA women’s soccer team on their victory, and leave you to enjoy the video where Solo dishes out on her track experience below.