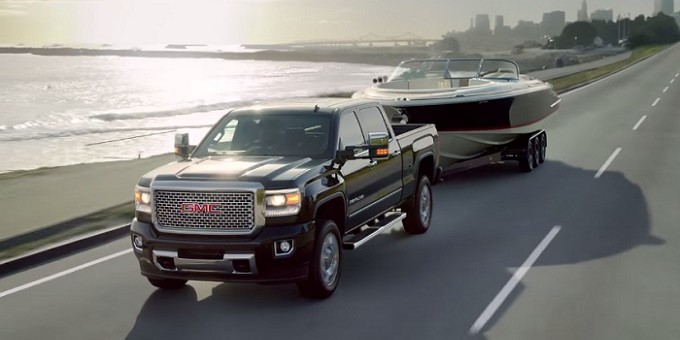 The refreshed 2016 GMC Sierra 1500 and 2016 Chevrolet Silverado 1500 gobbled up the lion’s share of the headlines this week. Though not a whole lot was revealed other than minor sheetmetal changes, we’re pretty excited to see and drive them both nonetheless. Incidentally, we also expect more info closer to launch. However, don’t that the news of the freshened up half-ton trucks distract you from what we see in the current trucks, namely, the HD models.

While we fully expect GM’s new line of HD trucks to show face soon, there is a key feature we’d like to share with you. The exhaust brake, standard on 2015 Sierra HD models with Duramax diesel engines, is one of those crucial features that operates seamlessly in the background when applied.

The exhaust ‘brake’ itself is a valve that closes off the exhaust path from the engine, which creates backpressure that retards engine speed and forces the built-up exhaust pressure ‘backwards’ into the engine, slowing the pistons down. This helps slow the truck on steep downhill grades, reducing brake distance and brake wear.

Hop in a 2015 Sierra HD and you’ll find the button for the exhaust brake in the switchbank below the climate controls in the center stack. Press it, and the driver information centre immediately flashes up a message informing drivers the system is activate. Information display aside, it’s easy know to know whether the system is on or off– the switch must be pressed each time the vehicle is started.

Once engaged, the exhaust brake is a totally automatic function and drivers should expect the transmission to downshift more frequently and more system activity as load increases. However, the exhaust brake also works in tandem with other systems, which means those automatic downshifts won’t occur if you’re in range selection mode.

It’s a simple yet ingenious solution and one we fully expect to see when GMC pulls the curtains off the 2016 Sierra HD in the coming months.

In the meantime, you can find out more about the trusty exhaust brake found on the current model in this 2-minute clip below.