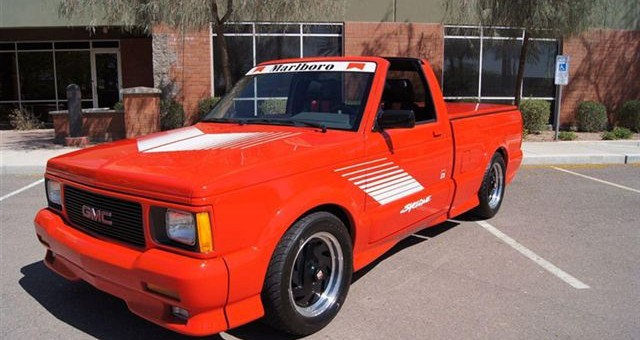 Porsche was still a relatively low volume manufacturer in the 1990’s and it faced huge challenges importing vehicles in the U.S. Restrictive DOT and EPA regulations drove up the development costs while poor exchange rates meant the company was forced to either raise the costs of its products or make less money on vehicles sold in the U.S.

However, this isn’t a Porsche website and by this point you’re probably wondering how this Porsche preamble is relevant to the GMC Syclone, the hotter version of the GMC Sonoma pickup truck offered by GM in the 90s.

The Syclone featured a turbocharged V6 engine, AWD, and 4-wheel ABS – features that could also be found on the Porsche Turbo, a vehicle that offered similar performance at a far greater price.  As a result of its more-for-less mantra, Syclone was a huge hit among enthusiasts.

The Syclone even claimed the title of fastest stock pickup in the world, as C&D found it took just 4.3 seconds to hit 60 mph.

The lucky winners truly received the ultimate Syclone. With the help American Sunroof Corporation (ASC) and Larry Shinoda, designer of the Corvette Stingray, the black-painted trucks were transformed into targa-topped pickup trucks with a slide-down rear window assembly.

Wander over to eBay now and this special edition special edition truck, the sixth truck in the ten-deep production run, could be yours for $79,995. The seller says (exaggerates?) that the vehicle cost GM $100,000 to make, so you’re practically getting a deal, right?

But you’d better hurry because this Syclone, with just 3,400 miles on the odometer, will be off the market today at 9:30pm.