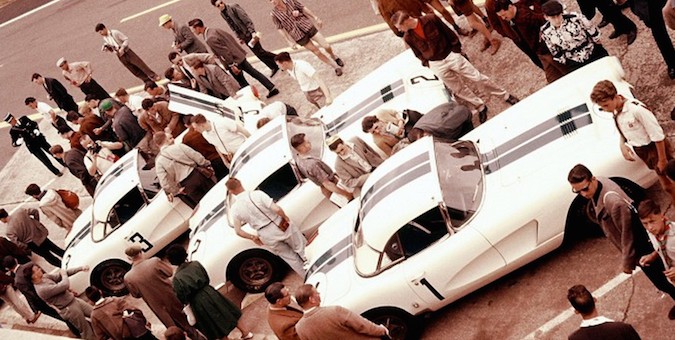 The mystery and subsequent ownership confusion of the Cunningham Corvette No. 1 has reached a conclusion, according to a new article published by Hemmings.

The No. 1 Cunningham Corvette was one of three C1 Corvettes that Briggs Cunningham took to the 24 Hours of Le Mans in 1960. It was crashed only three hours into the endurance race, with Cunningham’s No. 2 entry also failing to finish. The No. 3 eventually won its class and along with the No. 2 car was recovered and restored, however the location of the No. 1 remained a mystery for quite some time.

After its return to the U.S. the car was purchased by Dan Mathis Sr. of Tampa, Florida, who bought the car from a co-worker for $700. It was later stolen from his driveway and Mathis died without ever knowing what happened to it. Corvette historians began digging to discover its whereabouts and eventually Kevin McKay and Lance Miller located it in a St. Petersburg warehouse and bought it.

Dan Mathis Jr., who at the same time as McKay and Miller had been working alongside Corvette historian Domenico Idoni to locate his father’s stolen car, eventually found out McKay and Miller had the car and alerted the police. Mathis filed a lawsuit seeking ownership of the car, however because his father had never registered the car under his own name, things got dicey.

Mathis later filed for bankruptcy and Idoni bought his interest in the lawsuit for $25,000. U.S. Middle District Judge John E. Jones ruled on the case last week, approving an agreement which will see Mackay, Idoni and Idoni’s business partner Gino Burelli split ownership of the car. Idoni and Burelli will now own 70 percent of the legendary racer, while 30 percent will go to Mackay.

Idoni has high estimates as to the car’s value, while McKay believes it could break a world record if ever auctioned off.

“We were offered $3 million in the first week of 2012, before we even possessed the car,” Idoni said. “I believe it should be valued at $5 million to $7 million in the exact condition it’s in now, without even turning a screw, but who knows what the car will really bring at auction.”