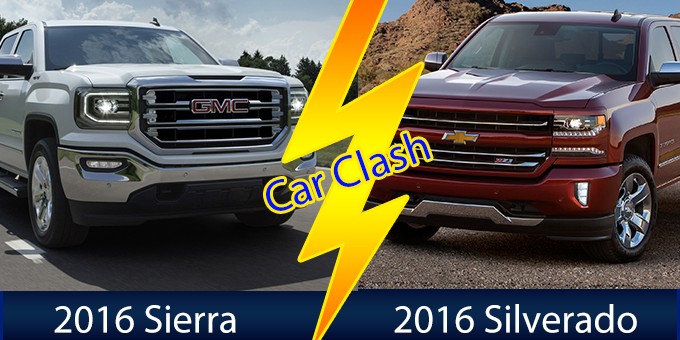 Welcome to another round of car clash here at GM Authority. With General Motors recently revealing their updated and revised full-size trucks, it only seemed fitting we pit the two designs together for a battle royale on which takes home the W.

In one corner we have the 2016 Chevrolet Silverado. The 2016 Silverado refresh debuts to much less chrome up front, which you initially voted a very good thing. Instead, a body-colored strip runs across the front grille, kissing the chrome goodbye with a modern take on the retro-inspired design of this generation thus far.

In the other corner we have the 2016 GMC Sierra. The 2016 Sierra’s refresh is a tad more subtle, but not a “spot the differences” kind of subtle. While the 2016 Silverado takes on a near totally different look in the front, GMC has provided more of a tasteful nip-tuck in the styling department of things. It’s classy, it’s handsome and still reads Professional Grade. Or, is that “Precision” now, GMC?

Both trucks receive new lighting treatments courtesy of the light emitting diode department, or LEDs. But, the GMC takes on more LED looks than Chevy, introducing what the brand is calling its “C” shaped LED lighting design in the front and read lights. The Silverado utilizes LED stripping under the one-piece headlamp design, with another running below the body-colored grille strip.

Both trucks looks quite good but, in this car clash, the 2016 Chevrolet Silverado rings a winner with us. The 2016 Sierra looks good, but we’re digging the modern twist on the retro-styling.

Now, it’s time for you to weigh in. It’s the battle of the GM full-size pickups. Keys dangling in front of you, which would you choose? The 2016 Chevrolet Silverado, or the 2016 GMC Sierra? Vote below, and let us know in the comment section.