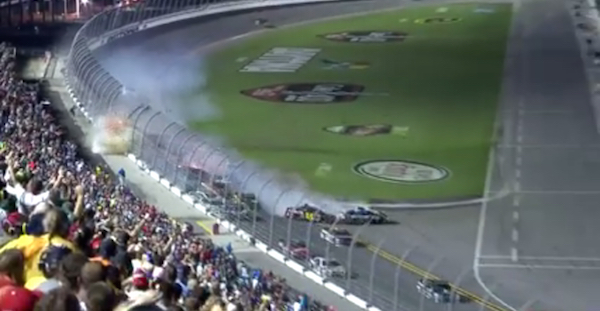 Austin Dillon walked away with merely a bruised tailbone and forearm following a scary wreck during the Coke Zero 400 Sunday night. The crash sent Dillon’s No. 3 Chevrolet SS flying into the front straight catch fence, launching debris into the crowd and injuring five fans.

A late-race caution forced a green-white checker after Sam Hornish Jr. lost control and slid across the infield grass. On the restart, Kevin Harvick got into the back of Jeff Gordon as he tried to gain position, pushing Gordon’s car into the No. 3 and flipping it up into the fencing. The violent wreck even overshadowed Dale Earnhardt Jr.’s win, with one fan telling USA Today it was the quietest a track has ever been when fan favorite Jr. won.

Dillon, who waved to the crowd following the crash, said NASCAR needs to rethink some of its safety procedures.

“It’s not really acceptable, I don’t think,” Dillon said. “We’ve got to figure out something. Our speeds are too high, I think. I think everybody could get good racing with slower speeds. We can work at that, and then figure out a way to keep the cars on the ground. That’s the next thing. We’re fighting hard to make the racing good. I hope the fans appreciate that. We don’t, but it’s our job. You go out there and hold it wide open to the end and hope you make it through.”

A total of 13 fans were examined for injuries, with eight declining medical treatment. The five fans who did accept treatment were taken to the infield car center, save for one who was transported to hospital.

Dillon was shaken by the crash but far from stirred, saying he’ll try and put it behind him and prepare himself for next weekend’s Quaker State 400.

“I’ll ice up and go get ready for Kentucky,” he said. “It happened so quick. I was just hanging on and praying I would get through it and get to race again.”

“This is what we do. We sign up for this every weekend.”