Editor’s note: Cadillac President Johan de Nysschen has replied to the letter. Scroll down the comments section to see his comment.

The following comes to us from Jeff T.

All my life, my Dad bled GM. Most of his friends, and a huge portion of our family worked at “the motors”. Fiercely loyal people. It runs off. Consequently, most of my cars have been GM.

When the bankruptcy hit I worried big time for my Brother and Wife in Oshawa. My cousins and many friends in the motors. It was then I started to really follow the industry. Worrying about their jobs, and pensions got me very interested in the General’s state. That is when I found your excellent site. I am at it 2-3 times a week. I also get the sales charts every month from the world over. Go GM!

When I found out Cadillac was making a 3 Series fighter I was so exited! I followed the news on your site constantly. And when it came out I got a loaded “Luxury” model coming in a little over $51K here in Canada. We were so excited. I posted my keys on Facebook and immediately the jokes started. “But how will you turn corners?” “How old are you again?” “Are you retiring?” etc etc. But I fended them all off with articles etc. It was the start of my being a self proclaimed Brand Ambassador.

Overall, we LOVE our car. There are 22 homes on my street. There are 4 3 series, 3 C-Class, 3 Audis, etc We stand out. I enjoyed taking friends for a spin. Watching them change their thinking. But I would have to say, after making such an awesome car, GM does some absolutely stupid things. The first day after driving my car to the gym I noticed I had no DRL LED’s. They are only offered on the swivel light package. I was so excited and nervous about getting my new ride I missed that part. I was not alone. Dozens of new owners had the same experience over at cadillac forums. Stupid me. But it bugged the hell out of me.

When you see a Mercedes C-Class, A4, etc coming up the road, 90% or more have some really cool LEDs. They scream “Hey, something exceptional is coming up the road!”. Mine could be a Malibu. As nice as it looks, not putting these on even the base ATS was a stupid move. If they want to change peoples’ minds, they need to stand out. Most ATS’s I see do not have them. Wasted opportunity. Especially on my 50k plus Luxury model.

But I still loved my car, my first true luxury car. Then the issues started. There was a small engine thing, followed by 2 months at the dealer. Yes, TWO months where the steering locked in a busy corner, the engine shut down, etc. They eventually found a cylinder head issue. Not long after a major oil leak all over the driveway and a funky noise in the tranny. CUE acting up, electronic issues meant another 2 1/2 weeks in the shop!

Around that time I took the time to write and mail a letter to Johan de Nysschen, the President [you can find it below]! The letter was more of a positive” I love your brand and your direction” “Here are some ideas I think would help in attracting younger buyers like myself”, etc.

After over a month from mailing it GM Customer service contacted me. A disinterested rep informed me the head office never read it, but forwarded it to GM Canada. She had not read the letter. You see, I did her job years back. I was a cust serv rep at GM for over a year. Nothing I took the time to write will reach anyone. It was a complete waste of time and postage. 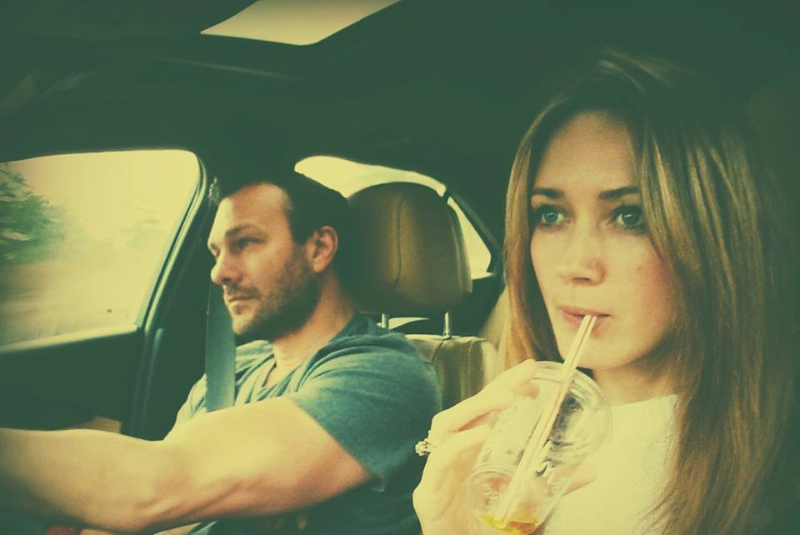 Jeff and his wife in the Cadillac ATS. Sweet pic, Jeff!

I know how desperate GM is to get the demo age lower with Cadillac. 59 in the USA? God knows here in Canada. I can tell you with absolute certainty that myself and certainly my wife are the youngest ATS drivers we have seen in Toronto. Every time my Wife drives the car I know she helps change perceptions. I retweet Cadillac tweets, like Facebook posts, wear a Cadillac hat to the GM. The best thing. When our car was away in the shop, we told our neighbours it was getting fixed from an accident. I did not want them to know about the problem because it tarnished the brand, and also found it embarrassing. My good friend wanted one after driving mine, but the Wife vetoed it: “not spending all that money for an old mans car”.

There is tonnes of work to do to change that. They had awesome customers in us. I did not complain when the last time the car broke, the dealer gave me a bloody SONIC saying they did not have anything else available. A SONIC… I still got excited about Cadillac news on your site. But as silly as it sounds, the fact that Cadillac HQ just forwarded my letter to a cust serv rep who could hardly wait to get off the phone may have been the last straw.

We were seriously looking at purchasing the ATS-V in the spring. But after almost 2 1/2 months in the shop etc and the above I think I will get more really “cache” driving the real thing instead of showing up in the under dog.

Thank you so much for sending in this letter and for being a loyal reader of GM Authority. We truly appreciate it.

We entirely agree with you about the Cadillac ATS and its shortcomings on the standard equipment side. Yes, the car itself is stellar: beautifully-designed and a gem to drive. But the way its options are packaged has often left us scratching our heads in bewilderment.

Your point of including the gorgeous LED Daytime Running Lights with HID headlamps on every single model is spot on, in our opinion. Indeed, Cadillac has its work cut out for it: to change consumer perception of its brand and its products in order to grow sales.

In being the challenger, Cadillac needs to do many things better than the competition. So while the standard lights work well and look ok, it would be worth it for Caddy to take it to the well-established BMW, Mercedes, Audi, and Lexus by including such a noticeable and beautiful feature as the LED-based DRLs and HIDs on every single model, no matter the trim level. After all, it would be a great way to attract the attention of other drivers to the vehicle and to perform the brand-building Cadillac so desperately needs. Sure, it might cost a little more and decrease per-unit profitability, but we have a feeling that it will be quite worth it in the long run.

Another element of the ATS (and CTS) that really ticks us off is the fact that only the driver-side outside rearview mirror is auto-dimming. The fact that every vehicle from the Germans and Lexus in the compact and midsize luxury class has both mirrors auto-dimming, while even the most loaded Cadillacs do not is simply laughable.

Here to hoping that Cadillac takes many of these things into account when making product changes for the 2016.5 and/or 2017 model years, and that the service experience at your Cadillac dealership improves.

Cheers and enjoy the ATS. We hope that an the ATS-V is in your future!

PS: we’re including your letter to Mr. de Nysschen below, in hopes that it actually reaches him. Customer communication addressed to the President of a brand (or a company, for that matter) should, at the least, be shown to him, and not passed off to a customer service representative.

Some takeaways for the folks at Cadillac:

I was so excited when I bought my 2013 Cadillac ATS you could not imagine. It was my first true luxury sports sedan. We got a loaded “Luxury” version with all kinds of goodies. An MSRP of around 50K. I was beaming and proud. The next day I drove up to my gym and noticed those trendy but cool looking DRL LED’s (Day time running lights) I saw on the ATS pictures etc were not on my “Luxury” ATS. I was stunned. I went home and onto CadillacForums where I found story after story of idiots like myself. For me I was just so excited to have “arrived” if you will, I did not read the fine print. I saw the swivel lights were not on the lux model, which was fine, but did not realize DRL only came as part of this package!?!?

I love Cadillac. I follow all the brand news on GM Authority. I cheer for your PWC racing team. I have always liked an underdog. And right now that is where Caddy is perception wise with much of the general public. My ATS is an incredible car, as is the CTS etc etc. But perceptions are still there. You want Luxury, you get a Bimmer etc like most of my friends have. I cannot for the life of me understand why Cadillac is not offering DLR’s on even the base ATS? I never see your competition without them. Even basic cars have them now. But when you see a CLA, A4,C series or 3 series, you know something special is coming down the road at you. Not so in my ATS. It could be a Malibu coming down the road from the front. You are missing a great opportunity to create a WOW factor on this amazing luxury car. You want people to get into the next car up eventually, so why cheap out on the base model? Or even worse a 50K Luxury package?? I see so many ATS’s here in Toronto without the eye catching DLRs? Each one is a missed opportunity for you to make a statement to every Merc driver out there. And make that ATS driver that more proud.

I have checked repeatedly for an aftermarket kit with the dealer, but nothing is being offered? I see the dealer often. Too often. My car was in the shop for 2 months straight last year while you tried to sort out a piston problem. TWO MONTHS…. It has been back for various things many times. In fact, today it is there with an oil leak and a transmission issue engineering is looking into. We are now over a week for this latest issue. Perhaps, just my bad luck? But I am seriously thinking of a Mercedes C series when the lease comes up. I have zero confidence in my ATS long term. And although we were considering an ATSV next year, this is now under much more scrutiny.

And isn’t that a shame? My Wife and I are definitely the market you crave. I have often joked with the dealer, you should be paying my Wife to drive the car around Toronto. She and I are the youngest ATS drivers we have seen here. Especially my Wife, who is also pretty damned hot. That is one way to change perceptions!

I love your ideas, and I wish you the best. I also hope you will take my humble advice.