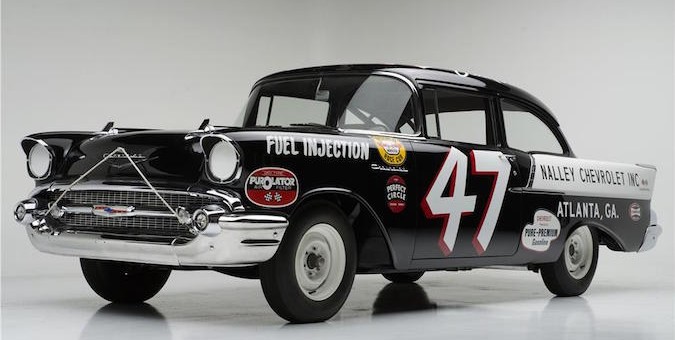 Few NASCAR racecars are saved after they’ve been crashed, which is just one of the reasons why this 1957 Chevrolet 150 ‘Black Widow’ set to go under the gavel at Barrett-Jackson’s Scottsdale 2016 auction is special. It was raced and crashed by Illinois native Jack Smith in the 1957 NASCAR season, and narrowly avoided the crusher after sitting in a field until the early 1990s.

Today, the Black Widow is one of two or three examples of similarly equipped 1957 NASCAR-prepped Chevrolet 150s, making its value nearly impossible to predict. Its motorsports career began when Nalley Chevrolet in Atlanta teamed up with Chevy performance engineer Vince Piggins, who built it up with a 310-315 horsepower 283 V8 connected to a Saginaw close-ratio three-speed manual transmission and a 3.90 rear axle. It was also given heavy-duty springs, a six-lug rear axle and bigger brakes meant for the limousine version of the 150, among many other modifications.

The example Smith drove was far from the only NASCAR-prepped 150 built by Piggins, but it’s one of the few surviving examples. Smith raced it in all 40 races during the 1957 season, finishing 25 of them. When Smith crashed the car, Piggins was able to provide him with a new example from Chevrolet, however they stripped it of many of its race-ready parts, sending just the bare chassis to the wrecker.

After Smith retired in 1964 the car found its way to Georgia, where it sat in a lot until the current owner, George Swartz, asked him about its whereabouts. It was then owned by an elderly gentleman who refused to sell, and Swartz was only able to acquire it after he had passed away, scooping it up just before it was sold for scrap.

After a full frame off restoration using authentic parts acquired from various sources and even Smith himself, the car was ready to be shown at various concours and vintage events. The car took first in class among various racecars at the 2012 Ault Park Concours, Yahoo! reports.