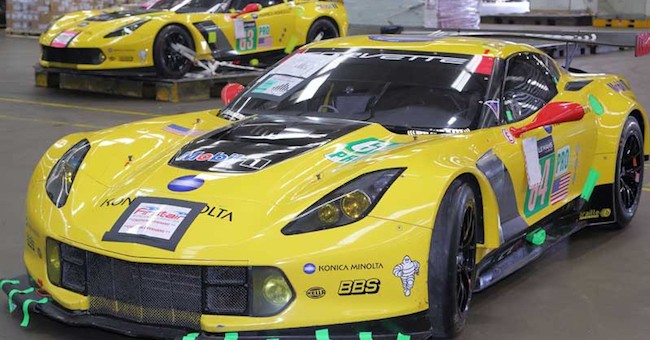 Have you ever wonder how race teams ship their cars and expensive cargo across the ocean for international races like the 24 Hours of Le Mans? It’s not the most glamorous aspect of motorsport, but without heavy freight companies to move all their stuff, teams wouldn’t be able to attend races all around the world like they currently do.

For this year’s running of the 24 Hours of Le Mans, Corvette Racing teamed up with Virgin Atlantic Cargo to ship its two Corvette C7.R racecars across the ocean. First the cars were moved from Pratt & Miller’s shop in New Hudson, Michigan to Chicago and were then flown on a cargo plane to London’s Heathrow airport. Over 16 tonnes of equipment and spare parts were also shipped on the plane along with the cars.

“We’ve worked together virtually since Virgin was born over 30 years ago because we know we’ll always get the job done right,” said motorsports logistics manager for First Air, a company which specializes in motorsport freight and works alongside Virgin Atlantic Cargo on such projects.

“Virgin supervised the loading and unloading of the cars and equipment and as always made sure everything arrived safely and on-time when we needed it.”

The 83rd edition of the 24 Hours of Le Mans will commence this Saturday. We won’t be the only ones cheering on Corvette Racing and their C7.Rs, with Virgin Atlantic’s John Lloyd also hoping the team can pull out a win in France.

“With victories in two of sports car racing’s biggest events already in 2015, we’re hoping Corvette Racing will continue their winning streak in Le Mans,” Lloyd said in a statement.