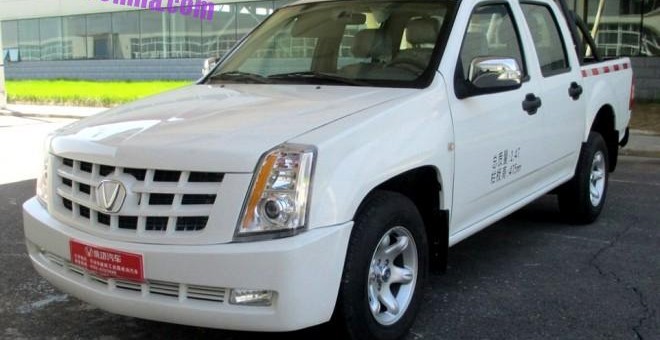 Meet the Shanxi Victory X1, a disfigured Chinese pickup that’s sure to keep Cadillac patent lawyers busy and us horrified.

It’s mug smacks of Cadillac Escalade EXT, but even then it’s bound only to fool the most casual observers. Like a bra filled with bolt-ons rather than bonafide breasts, it only takes a couple seconds to spot the differences.

Instead of the Cadillac Crest on its snout, the Shanxi wears a simple ‘V’ badge encircled by a shape that’s neither square nor circle. We’ll call it a half-demented circle.

The Shanxi’s grill lacks the chrome trappings and accents found on the EXT and it even wears a different grill pattern, with five diagonal slates and three vertical, rather than the four across and four down arrangement on the EXT. Even the lights themselves aren’t quite right.

Unfortunately, those used to the silky smooth powerband of the EXT’s Vortec V8 will be severely underwhelmed when they put foot to floor and find the Mitsubishi-sourced 2.4L four-cylinder gas engine cooks up a measly 136 hp and 147 lb-ft of torque. You’ll also have to row through the five-speed manual gearbox yourself, just don’t be surprised when it only gets you to 130 km/h (80 mph).

If a layperson were fooled by the Cadillac-esque exterior, they should have no problems spotting the fake once they enter the cabin. The Escalade’s leather chairs and plush accruements make it easy to pile on the miles, but we’d rather travel in the truck bed than have to endure any amount of time in the cave of beige and hard plastics Shanxi calls an interior.

Though it might have Cadillac up in arms, it’s bound to hit the Chinese market all the same. Try as they might to stifle the endless sea of sloppy fakes, OEMs can’t seem to penetrate China’s protectionist patent laws.

It’s not the first Cadillac Escalade knockoff from Shanxi we’ve seen and we doubt it will be the last.