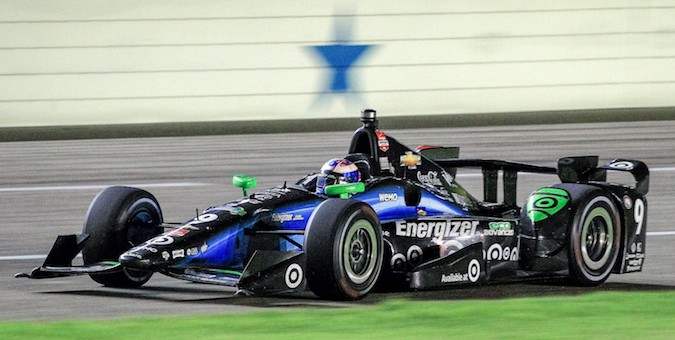 Scott Dixon drove to victory under the lights at Texas Motor Speedway Saturday night, his second career win at the Lone Star State circuit and his second of 2015. Dixon, who started from fourth row after qualifying seventh, led for 97 of the race’s 248 laps, more than any other driver.

The Texas race might be described by some as uneventful. It ran crash-free for its entire duration, with the only caution flag being brought out for debris on the front stretch. The Chip Ganassi squad bested the dominant Penske camp in the drama-free competition, with Dixon crossing the finish line 7.8 seconds ahead of teammate Tony Kanaan. Penske, who’s drivers qualified 1-2-3-4-5, couldn’t manage a better finish than Helio Castroneves’ third place.

IndyCar’s new aero kits worked in Dixon’s favor, with the Penske teams running a lower amount of downforce than Ganassi’s. Dixon had originally wanted to run less downforce after seeing where the Penske cars qualified, but the added grip ended up paying off once the green flag flew.

The result makes Dixon the only multi-race winner so far this year apart from Juan Pablo Montoya. With 305 points, the New Zealand native is quickly approaching second place’s Will Power with 313 points and is on his way to catching up with Montoya, who has 348 points.