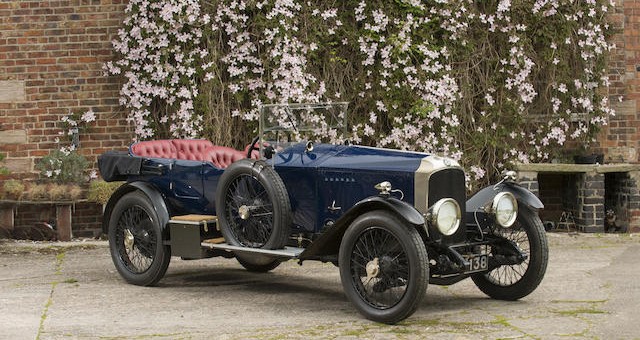 Posh, elegant, classy, sophisticated – these words perfectly describe a car that happens to be almost a hundred years old. But this isn’t just any old jalopy, it’s a one-of-278 1921 Vauxhall 30/98 E-Type Tourer, a collector’s dream. With a very impressive power-to-weight ratio for its time, it was one of the first cars to be built with the “big engine/lightweight car” formula.

Valued between $280,000 and $370,000, this is the original 30/98 body on the original chassis, with coachwork done by Mann Egerton. The current vendor bought the car from Stuart Baxter back in 1991. It was purchased as a rolling chassis with some body parts, and was restored before participating in Vauxhall’s centenary celebrations in 2003. Naturally, the receipts for restoration have been filed and come with the car, as well as a V5C registration document.

This fine piece of history has never been used competitively while in the possession of its current owner. It was reserved for family and VSCC social events. The car actually sat for quite some time, 1934 to 1990 to be exact, and the body was used on another vehicle during this period.

You’re probably wondering why such an extraordinary vehicle went unused for so long. Apparently, the story behind this Vauxhall is that it was sold with garage premises in Great Dunmow, Essex. It was apparently abandoned by a customer who never returned to pay their debt of £7, it’s now worth 30,000 times as much as that. Whoopsie.

The car was dismantled and stored before eventually being rebuilt into what you see today, a fine specimen of vintage automobile. It will be auctioned off at the Bonhams Goodwood Festival of Speed Sale this month, along with a very interesting Corvette.