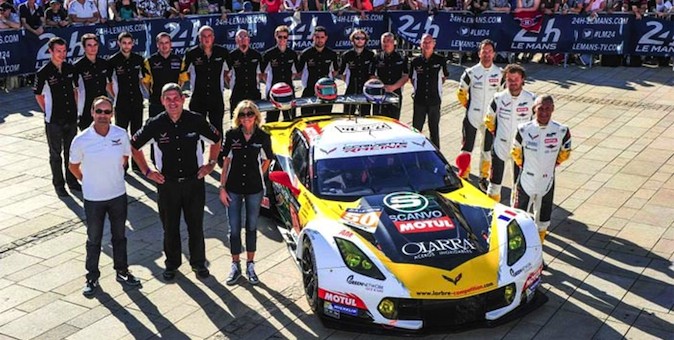 For the 16th consecutive year, Corvette Racing and its two yellow Corvettes will line up on the grid at La Sarthe for the greatest endurance race in motorsport, the 24 Hours of Le Mans. They won’t be the only guys in a C7.R this weekend, though, as French racing team Larbre Competition will also be bringing one of their C7.Rs they race in the WEC to Le Mans.

While the Corvette Racing guys compete in the GTE Pro class, Larbre will be representing the Corvette brand in the GTE Am category. The team has won the class five times prior and its three drivers, Kristian Poulsen, Gianluca Roda and Paolo Ruberti will be hungry for their sixth when the race goes green this Saturday.

Larbre has already undergone the mandatory scrutineering procedures ahead of the race and participated alongside other GTE Am teams earlier this month at Le Mans Test Day. The team says it’s “grateful,” for the Test Day, as rain is in this weekend’s forecast and the test day was run in inclement weather for its majority.

“It’s my fourth time here at Le Mans; the best race in the world! It’s a really special week for the French fans, as well as all those that travel from abroad to come and watch,” said Roda. “I’m feeling good about the race after our strong Test Day in the rain, especially as we’re expecting similar conditions on Saturday and Sunday. However, 24 hours is a long time so we’ll see what happens.”

Larbre has been to Le Man a staggering 23 times before, so they stand a pretty good chance at winning their class based on experience alone. You can cheer them and Corvette Racing on when the 24 Hours of Le Mans starts this Saturday at 9 a.m. ET. For a full schedule of FOX Sports coverage of the race, click here.