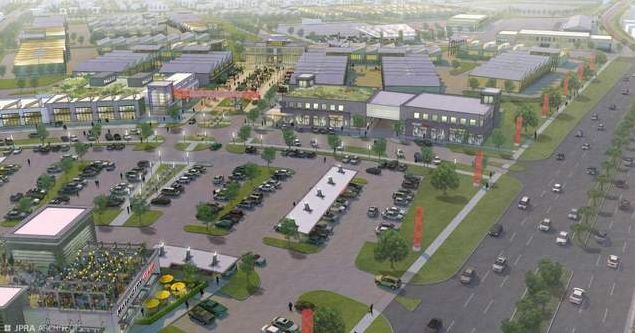 The rust belt is continuing its transformation, after years of old manufacturing sites sit vacant, cities and private investors are flexing their creativity to repurpose old spaces. The latest news should intrigue every gear head, though.

At the grounds of an old General Motors facility, located in Pontiac, Michigan, just off of Woodward Avenue and South Boulevard, there will be home to an ambitious new car condo project. A report from The Detroit News states ground has broken for the private-automotive housing project.

CEO of the M1 Concourse project, Brad Olehansky, says he envisions 264 condominiums and a one and one-half mile long race course for owners to test, tune and run their cars. The land stretches 87-acres, as the facility was leveled in 2008.

For $110,000, that gets you a 600-square-foot condo with a private bathroom, with space for two to four cars. Should you plunker down $250,000, space climbs to 1,200-square-feet, with room for five to eight vehicles. Each condo is private, and includes climate control as well.

The project is proving to be a success thus far. The first 80 condos, phase one of the project, have already sold out, a positive sign for Olehansky and his plans.

“The track will be built by the end of this year and the first condos occupied and in use by spring,” said Oleshansky. “We’re going to put Pontiac back on the map.”

Phase two will see 57 more condos constructed and, if phase two is as successful as phase one, a third phase will include 127 more condos, an auto dealership, retail and restaurant space.

It sounds like quite the shot in the arm Pontiac, MI needs at the moment, and hopefully all goes accordingly for this creative, and frankly awesome, idea.