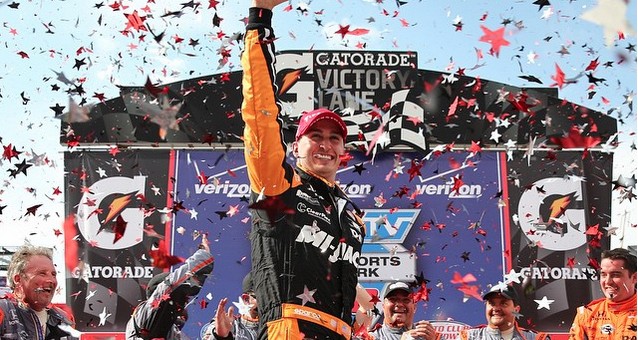 Graham Rahal has won IndyCar’s third outing to an oval circuit this year, claiming victory in the MAVTV 500 at Autoclub Speedway in Fontana, California Saturday night. The race saw the return of pack racing to the Verizon IndyCar series, with drivers running three and four wide all night, which also raised some questions in regards to driver safety.

The race ran under a green flag for 136 laps, with Helio Castroneves taking an early lead until the first round of pit stops on Lap 35. The yellow came when Castroneves clipped Will Power on Lap 136 and went spinning across the track and hit the inside wall. Another caution flag was put out soon after for contact between teammates Ed Carpenter and Josef Newgarden on Lap 158, which ended both of their days.

The inevitable result of the tight pack racing which had gone on all night came with nine laps left. Takuma Sato lost control of his car and clipped Power, sending them both into the outside wall and putting out a red flag. On the restart, Rahal, who had run near the front of the pack all night after starting nineteenth, held onto his lead as Team Chevy’s Tony Kanaan and Marco Andretti trailed in second and third.

As the race was coming to a close, contact between Ryan Hunter-Reay and James Hinchcliffe sit-in Ryan Briscoe put out another yellow flag. The crash sent Briscoe sliding backwards before his Honda flipped into the air in a similar fashion to the controversial end-over-end crashes at the Indianapolis 500 last month. Neither driver was injured, however the night’s numerous close calls and caution periods worried many drivers, including Power.

“What are we doing? What are we doing?” Power following Briscoe’s wreck. “That was a Vegas situation right there. I’m just so happy no one was really hurt. … Someone is gonna take responsibility for how this day has panned out. As exciting as it is, it’s insane. You cannot get away. You have to take massive risks to gain track position. It’s crazy, crazy, crazy. We just don’t need another incident like we had at Vegas. And running like this it will happen. It’s just a matter of time.”

Rahal won the race under caution, with Kanaan putting Chevy on the podium in second and Andretti giving Honda more points in third. The result was Honda’s third win in 11 races so far this year, with the previous two coming at Detroit and the rainy Grand Prix of Louisiana at NOLA.

Chevrolet currently leads Honda in the IndyCar manufacturer’s championship. The series heads to Milwaukee next for the ABC Supply 250 on July 12, the fourth oval race on the series’ calendar. For full results from the MAVTV 500 at Fontana, click here.