The automaker’s May 27th, 2015 applications specify that the marks will be used to name motor land vehicles, namely, automobiles.

In August 2014, General Motors filed two trademark applications for the terms Bolt and Chevrolet Bolt. Then, in January 2015, General Motors unveiled the Chevrolet Bolt EV concept at the 2015 North American International Auto Show in Detroit. Sporting a GM-estimated 200 miles of electric range, GM said that the vehicle would sell at a target price of around $30,000. Shortly after, GM confirmed the Bolt EV for production. 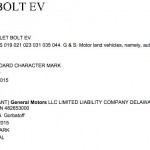 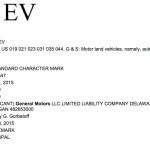 But shortly after the unveiling of the Bolt concept, the Bolt name started to be put into question, as some felt that the name could be confused with another electric vehicle in the Chevrolet lineup — the Volt. In fact, roughly 75 percent of GM Authority readers voted to have the name changed to something other than Bolt.

At first, GM North American chief and global Chevrolet President Alan Batey stated that it was possible for the Bolt name to be changed by the time the vehicle reached production, but GM then confirmed that the name was here to stay in April.

Last week, however, General Motors’ original trademark applications for Bolt and Chevrolet Bolt were suspended by the USPTO. This was due to Yamaha owning the trademark rights for the term Bolt. However, GM has had an agreement with Yamaha from 2014 to use the Bolt name; once it supplied the appropriate documents to the USPTO, the suspension was rescinded.