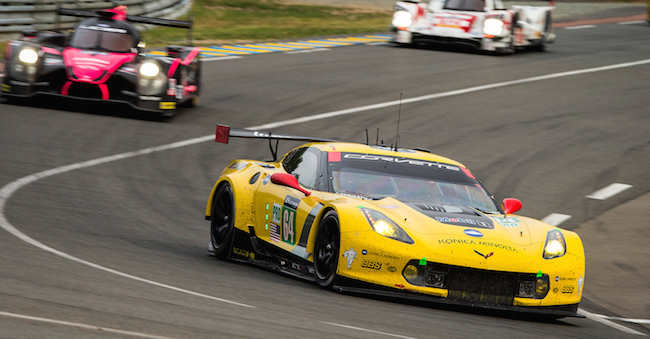 Last year Corvette Racing competed in its first FIA World Endurance Championship event outside of the 24 Hours of Le Mans, sending Jordan Taylor, Ricky Taylor and Tommy Milner to Texas to race the 6 Hours of Circuit of the Americas. At the same time, they had their No. 3 and No. 4 cars in Texas competing in the TUDOR round at COTA, making for a three-car effort across two race series.

Corvette Racing’s dual-series effort has us wondering, where else could the team compete? Their impressive performances at Le Mans over the years are evidence they’d be competitive in other rounds of the FIA WEC, but at the same time, we can’t see them abandoning TUDOR completely. An alternative would be similar to what Ford is doing with the GT, which is giving Chip Ganassi Racing four different cars and fielding two in TUDOR and two in WEC.

The only problem with fielding four cars in two different race series is cost. Its easy for GM to justify fielding the Corvette in TUDOR as it’s advertising to Americans, but the FIA WEC mostly panders to Europeans, who don’t really buy that many Corvettes. On the other hand, there are plenty of Corvette fans who would love to see the C7.R taking on Porsche, Ferrari and others on their home turf in Europe.

Another option would be Corvette Racing evolving into an LMP1 program. This seems entirely unlikely, but the mere idea of a yellow LMP1 car that looks loosely like a Corvette has us excited. We don’t think this will ever happen, but with a mid-engine Corvette on its way, it seems more likely now than ever.

So what do you think Corvette Racing should do next? Personally, we’d be all for a four-car effort split between TUDOR and WEC, especially since Ford has plans to do just the same. At the very least we’d like to see them take on another round of the FIA WEC, specifically the 6 Hours of Spa or 6 Hours of Nurburgring.

Let us know how you’d like to see Corvette Racing evolve or if you just want them to stay the same by voting below.