We previously received word the 2016 Chevrolet Cruze would debut on June 24 in the brand’s hometown of Detroit, Michigan. As we approach the reveal date, Chevrolet has passed on a creative message for us to decode.

The latest piece of information on the 2016 Cruze has been sent our way with no text, no photos, nothing. Instead, they’ve spelled out features and capability of the 2016 Cruze in emojis. It’s actually a fun puzzle to stare at and try to understand. The only true text attached was the inclusion of a new hashtag: #ChevyGoesEmoji. Fire up your Twitter and Facebook, and follow along for more clues should you be so compelled.

The more we look at it, the more we begin to figure out, though, some of it remains a mystery to us. Maybe some of the hardcore internet generation will have a better shot at figuring out what some of the information means.

What we know to expect from the 2016 Cruze is an all-new design for the North American market, the addition of new Ecotec engine offerings, a possible seven-speed dual clutch transmission and compatibility with Apple CarPlay and Android Auto.

Nonetheless, we encourage you to give it a shot and post your translations in the comments section below. So far, we’ve figured out three of the lines are referring to greater fuel economy in the 2016 Cruze, the addition of OnStar 4G LTE and OnStar’s latest safety technology. Besides that, your guess is as good as ours. We’ve provided the emoji puzzle for you right down below. 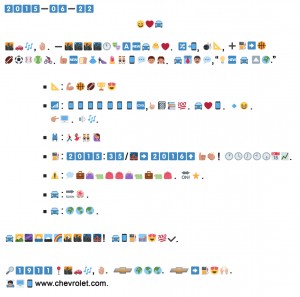