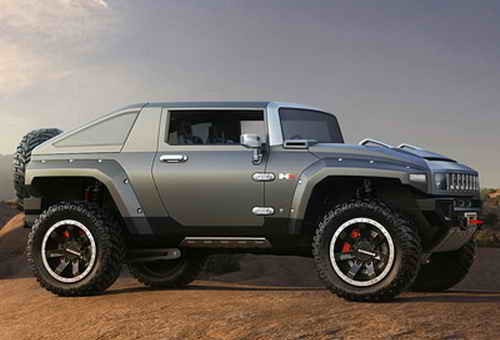 The following comes to us from C.R.:

Hummer H4… will there be one?

As unfortunate as it is, Hummer is no more, so the short answer to your question is no.

During GM’s bankruptcy proceedings in 2009, it was decided that Hummer no longer needs to be part of the new GM, and would therefore be sold off or discontinued completely. An attempt by Chinese manufacturer Sichuan Tengzhong Heavy Industrial Machinery Company to acquire the brand didn’t pan out, and GM ended up dismantling Hummer.

But even with Hummer’s demise, there still might be hope for a Hummer-like vehicle from GM.

For the last couple of years, it has been rumored that GM’s GMC brand would release an off-road-oriented SUV that would take on the likes of the Jeep Wrangler (over and over again). Coincidentally, that’s the segment in which the Hummer H4 (or the Hummer HX concept) would have competed if it were to be brought to market before Hummer’s demise.

To note, GM has not confirmed the development of such a vehicle, and there have been no spy shots. Even so, enthusiasts remain hopeful — as GMC would be the perfect brand for a Wrangler fighter.

In the meantime, the closest thing GM has to an H4/HX concept in the current product portfolio is the 2015 Chevy Colorado and GMC Canyon midsize trucks… but they’re not exactly compact or strictly made for off-road, though an off-road Colorado variant is on the way via the Colorado ZR2.