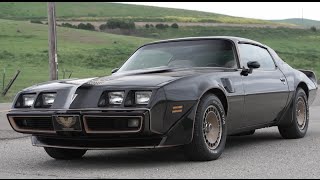 The emergence of fuel emissions initially snubbed performance ambitions in the auto industry a few decades ago. One car to suffer immensely from the exhaust restricting regulations was the 1981 Pontiac Firebird Turbo Trans Am. Mike Musto from /Drive’s Big Muscle tells us that the power of these Garrett-turbocharged 4.9L V8 engines fell from 400+ hp to around 200 hp. Needless to say, that’s a huge drop.

Musto points out that it’s not the speed, or lack of speed, of the Turbo Trans Am that makes it cool. Successful marketing ploys, good looks, and a role in popular movies is what help set this Pontiac apart from its competitors. That, and it’s a pretty rare car, having only been produced for a single year. This particular model has only 32,000 miles on the dash, and it is the Y84 Special Edition.

In addition to its exclusivity, the Trans Am is fitted with a “Turbo Charge” indicator under the cowl of the hood. As boost pressure increase, the red lights begin to glow. We see it as an innovative attempt to make the driver feel quicker.

This example of classic American muscle wouldn’t rank high on too many lists. But as Musto points out, not many are aware of its existence. We can appreciate what this car represents, though Musto’s youthful ties to the car may make the Turbo TA a bit more appealing to him. Where does this car rank on your list? See the video below, and then let us know what you think.