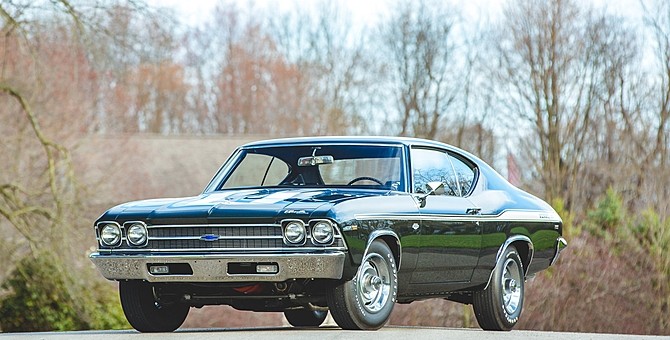 Hunting for an automotive jewel to crown your ample muscle car collection? Look no further than this fully documented, two-owner 1969 Chevrolet Yenko Chevelle.

Purchased new at Yenko Chevrolet in Canonsburg, PA by Ms. Josephine Gresko on June 24, 1969, this Fathom Green Chevelle with White SYC graphics was then traded into Bill Keith Auto Sales in Wexford, PA in 1976.

The next (and current) owner was one lucky SOB – his parents bought it for him, as he was too young to sign the paperwork. What a youth like that is going to do with a Yenko Chevelle, we’re not sure.

But its well-documented history isn’t the only aspect that makes this car special. This Baltimore-built Chevelle, with COPO 9562, also features the 15×7-inch COPO Chevelle Rally wheels and special Goodyear Polyglas F70-15 tires, which were part of 9737 Sport Car Conversion, another COPO code often used by Yenko.

Pop the hood and you’ll find a numbers-matching L72 427/425 hp big-block engine, which is hooked up to a Hurst-shifted M21 close-ratio 4-speed manual.

You also get power front disc brakes, a 4.1:1 rear end, a Yenko-installed Stewart-Warner tachometer, and a bench seat cloth interior, a combination not often seen on the 4-speed package, according to Mecum.

The new owner will also sleep tight with the knowledge that the car was treated to a full nut-and-bolt restoration back in 2013.

Real COPOs are a hot commodity and few offer such a transparent and well-documented and history. There’s no price listed yet but we’d recommend you call your account in advance becauze you can pretty much guarantee this one won’t move off the block for less than six figures.

Here’s what else you can expect to see if you head to the Mecum auction in Harrisburg, PA on July 30-August 1.