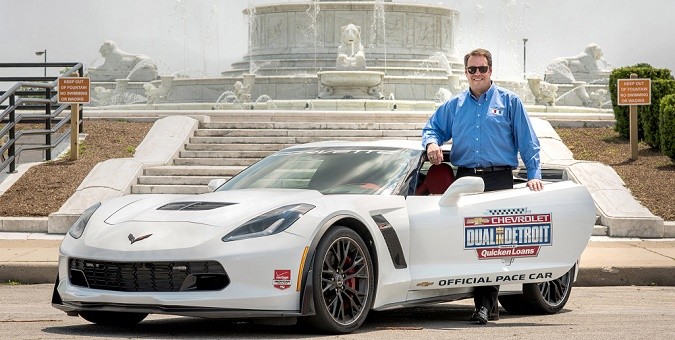 A 2015 Chevrolet Corvette Z06 paced the 99th running the Indianapolis 500 last weekend, but the supercar’s IndyCar pace duties were far from over. The C7 Z06 will also pace this weekend’s Dual in Detroit at Belle Isle, and behind the wheel will be none other than General Motors’ product development boss and diehard motorsports fan Mark Reuss.

Reuss and the Z06 will pace both Saturday’s and Sunday’s IndyCar rounds. His Z06 is similar to the one Jeff Gordon drove at Indianapolis Motor Speedway last week, with an Arctic White exterior, Adrenaline Red interior, 7-speed manual transmission and the necessary pace decals and safety lights. The long time GM exec said he’s “thrilled” to be pacing this weekend’s IndyCar races, which will happen not even two miles from GM’s Renaissance Center world headquarters.

“Growing up here and having the opportunity to help bring this great event to racing fans in Detroit has been very exciting, and the privilege of driving the pace car makes it even more special for me,” Reuss said in a statement.

It’s always handy if a pace car driver has a little racing experience, and Reuss doesn’t disappoint in that regard. In addition to being an avid follower of motorsports, Reuss is also a certified industry pool test driver on the Nurburgring and led GM’s Performance Division in 2001. He also oversaw the development of several GM racecars and the production versions of the current Chevrolet SS and Cadillac V-Series lineup.

“Mark has always lived and breathed performance cars, so it’s perfect to have him behind the wheel of the most powerful and capable production car ever made by Chevrolet,” Chevy’s U.S. vice president of performance vehicles and motorsports, Jim Campbell, said in a statement.

You’ll have two opportunities to see Reuss behind the wheel of the Z06 this weekend, with an IndyCar race scheduled for Saturday and Sunday at 3:30 p.m.