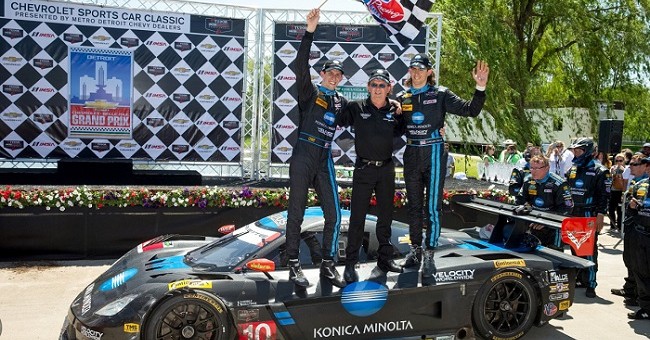 Wayne Taylor Racing’s Jordan Taylor has won at many different tracks throughout his racing career, but he’s been particularly consistent on the streets of Belle Isle. The 24-year old won there in 2012 with Autohaus Racing and followed it up with two more wins in 2013 and 2014 with his dad’s team, Wayne Taylor Racing.

The TUDOR United Sportscar Championship heads to Belle Isle this weekend, and you can bet Jordan will be on full attack as he looks to lock in his fourth-straight win on the Detroit street course. Just like last year, Taylor will be behind the wheel of the No. 10 Konica Minolta Corvette DP Saturday and will split driving duties with his older brother Ricky.

Last year, the duo raced their damaged Corvette DP to a thrilling victory after making contact with the No. 5 Action Express Racing Corvette DP of Joao Barbosa. The hit put Barbosa in the lead, but he was forced to slow down with a left rear tire puncture shortly after, allowing the Taylor brothers to reclaim first place and lock down the win.

The Taylor brothers are currently third in TUDOR standings, with Action Express Racing’s Christian Fittipaldi and Joao Barbosa sitting in second and VisitFlorida.com Racing’s Michael Valiante and Richard Westbrook in first. The Taylor brothers’ worst finish so far this year was at the 24 Hours of Daytona, where they actually finished third but were dropped to last after race officials discovered Jordan’s stint exceeded maximum drive time limits. But with a first place finish at Long Beach and a second place result at Laguna Seca, the Wayne Taylor Racing camp seems to be getting stronger with each race.

Jordan and Ricky will hit the streets of Belle Isle this Saturday at 12 p.m. when the Chevrolet Sports Car Classic presented by the Metro Detroit Chevy Dealers goes green. You can keep up with live timing and scoring at IMSA.com and may also view the race live on FOX Sports 2.