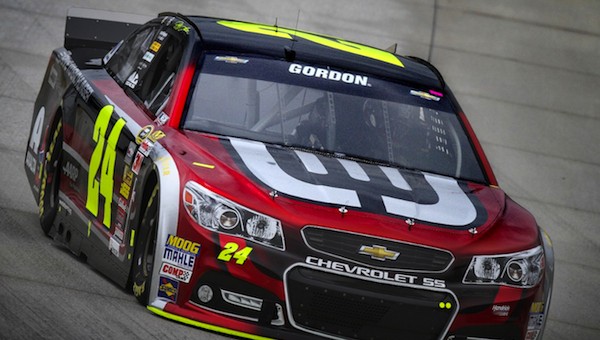 Despite starting from pole position and leading 47 of 188 laps in Sunday’s Geico 500 at Talladega Superspeedway, Jeff Gordon failed to earn his first win in what will be his last ever full-time Sprint Cup Series season. The Hendrick Motorsports driver had the fastest car of the 43-car field, but a small mistake during a late-race pit ended up costing him the race.

When the green flag waved, it was immediately apparent Gordon was going to be a force to be reckoned with throughout the 188-lap race. He and the No. 24 Chevrolet SS were fast enough to hold the lead and keep the rest of the field at bay, but for the second time this season, a pit-road speeding penalty would ruin his chances at winning.

Gordon was running the top ten when he pulled into pit road for his final pit stop of the race with about 31 laps remaining. As he was pulling in, a problem with his car prevented him from slowing down to pit road speeds, netting him a speeding penalty for the second time this year.

“The car wasn’t slowing down,” Gordon said. “I don’t know if I got on the splitter, but it would not slow down. I knew I was speeding.”

The mistake, which happened just as Austin Dillion blew an engine and put a caution flag, meant Gordon was near the back of the pack for the final restart. Unfortunately for him, the pack moved into a single-file formation for the remaining 26 laps, making it especially difficult for him to pass slower cars.

“If those guys decide to go single file like that, you’re not going anywhere,” Gordon said. “I was in the middle on that final restart, making some ground up, and all of a sudden they all went outside, and that point, it was over. You’re just sitting there waiting for the white flag to come up.”

Gordon was involved in a last-lap wreck and turned up 31st, marking the second time so far this year he has started on pole but ended up wrecking on the final lap, with the first instance coming at Daytona. The four-time Sprint Cup champ is looking to secure a spot in the chase and will be hoping for a win as the NASCAR Sprint Cup Seires heads to Kansas Speedway this weekend for the Spongbob Squarepants 400.