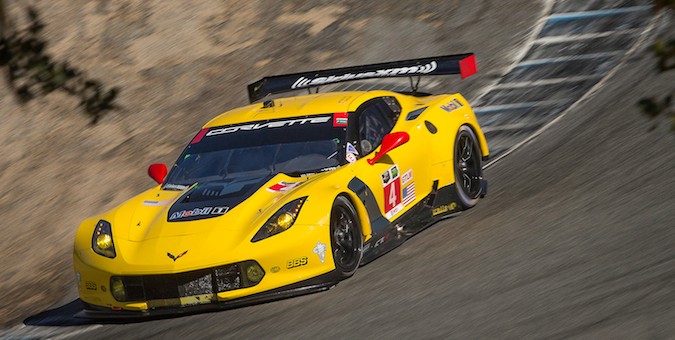 Jan Magnussen obviously wasn’t pleased with Corvette Racing’s sixth and seventh place finishes at Laguna Seca earlier this month, but in his most recent column for Motorsport.com, the Dane acknowledges it’s better for the team’s bad performance to be “the race before Le Mans, not Le Mans itself.”

The May 3 race at Laguna Seca was tough for Corvette Racing from the get go. As Magnussen explains, teammate Antonio Garcia had a good start but then got caught up in a group of prototypes and ran into the back of one, damaging the C7.R’s front clip. The team was also running on a new, unfamiliar tire compound that day, so the front wing damage made finding grip even harder.

The Corvette camp is viewing their poor performance at Laguna Seca as a learning opportunity ahead of Le Mans. They recently completed a pre-Le Mans test at the National Corvette Museum’s Motorsport Park in Bowling Green, Kentucky, where Magnussen says they “made some good headway,” and collected some crucial data ahead of the French endurance race in mid-June.

Magnussen races in Denmark this weekend, and then it’ll be off to France for the Le Mans test day. Don’t forget to cheer Corvette Racing on during the 24 Hours of the Le Mans, and if you live in the Bowling Green area, you can watch the race alongside other Corvette fans at the National Corvette Museum’s viewing party.