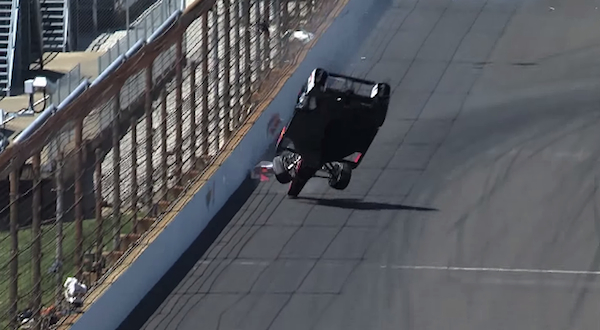 IndyCar drivers, teams and officials are left with a hoard of questions following pre-Indy 500 testing this week, which saw Helio Castroneves and Josef Newgarden crash in two identical and scary wrecks.

Both incidents occurred when Newgarden and Castroneves lost control of their Chevrolet Dallara DW12s exiting a turn and spun 180 degrees, sending them sliding backwards down the straight. The cars then shot up in the air and landed upside down, with Newgarden sliding a far distance upside down and Castroneves coming to a rest right side up.

As USA Today reports, the crashes have raised concerns that the new Chevrolet aero kits are prone to being swept up and flipped if travelling backwards. Following Castroneves’ crash and a suggestion from Roger Penske, IndyCar made the aerodynamic strip on the nose optional for Thursdays test. Penske said the strip pushed the nose of the car down making it easier for the back end to lift.

“It’s definitely concerning; we haven’t had cars doing that ever in my career,” said Ed Carpenter, the team owner of CFH Racing, who employs Newgarden. “There’s a lot differences (with the cars) this year.”

“There’s aero kits, there’s a giant hole in our underwing, there’s a lot of things that are different,” he added. “I don’t know that we understand why it’s going on at this point.”

For now, it’s unclear if the crashes point to a larger problem with the Chevrolet aero kits, or are merely coincidences. Things may become clearer in regards to the matter as the Indy 500 approaches.