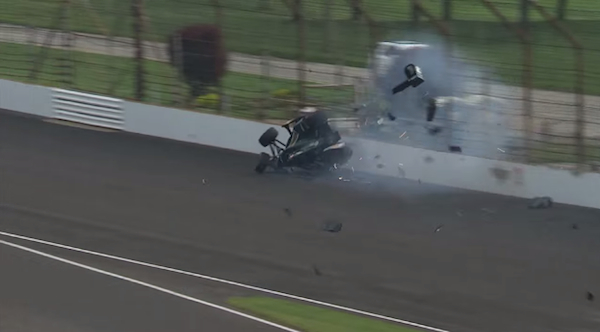 IndyCar has taken action after Helio Castroneves, Josef Newgarden and Ed Carpenter experienced eerily similar airborne crashes during practice sessions ahead of the Indianapolis 500. To help prevent flips and slow the cars down a bit, the race series lowered the maximum amount of boost pressure and mandated all cars use their respective Honda or Chevrolet aero kits for qualifying this past Sunday.

The IndyCar series originally was going to allow drivers to run 140 kPa of boost pressure during qualifying and was also allowing teams to modify the Chevrolet or Honda aero kits to lessen downforce and increase average speed. However following the crashes, the series forced teams to use the race-mandated 130 kPa of pressure and the full aero kit configuration, creating more downforce and in theory lessening the chances of yet another frightening upside-down, airborne wreck.

“This morning we saw a third car get into wall, turn backwards and lift into the air. We’ve said all along we want to go faster, but we want to do so safely,”

IndyCar CEO Mark Miles said ahead of qualifying Sunday. “As a precautionary measure, INDYCAR will require that the cars qualify today in the same aero set up that they will run in the Indianapolis 500 next weekend. Also, for today, boost levels will return to race conditions. Given these changes, we have elected to not award points for today’s qualifications.”

The rules certainly slowed the cars down and made for a somewhat less exciting qualifying session, but that’s a very small price to pay in the name of driver safety. The session ran problem free, apart from being delayed for rain until Sunday, and Scott Dixon ended up on pole with a lap of 226.7 mph.