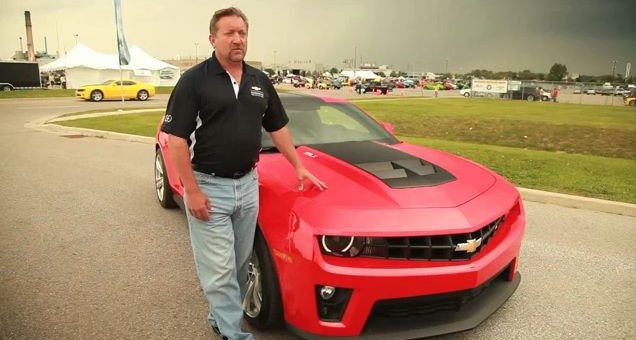 For all intensive purposes Al Oppenheiser, Camaro Chief Engineer, is the guy you can blame for the run-away success of the fifth-gen Camaro.

Though Oppenheiser has had his hand in a number of GM products–from the gen-one Colorado/Canyon to the Pontiac G8 and even the Geo Metro– his current position puts him front and center of all things Camaro.

He’s not just in charge of engineering, he’s also has to make the business case for the finance, marketing, and manufacturing ends of the product.

Hot Rod Magazine sat down with Oppenheiser at SEMA 2014 in order to find out more about the man behind the muscle car.

On his hiring and dream job at GM:

Oppenheiser says growing up he always wanted to work on cars. During his first interview with GM the interviewee took him out in a ZR-1 mule with the LT5 engine– he was hooked. Though he didn’t land his dream job at first–working in the GM Performance Division– he was folded into the ranks.

Years later, while in GM’s old Shreveport plant in Lousiana (where the company built compact trucks from 1981 to 2012), Mark Reuss called Oppenheiser about working in the GM Performance Division, “It was like a dream come true,” he told HRM.

“We did,” he said. However, manufacturers have little time to actually close the track to the public and use it as a test track. Though the track is open to the public during the day, other traffic makes it difficult to post a fast lap time.

Plus, as Oppenheiser notes, there are “gentlemen’s agreements…they don’t allow cameras during the day, because while we might have production Z/28s over there, Mercedes or Range Rover or Porsche, they might have something camouflaged.”

“We’ve actually run Z/28 times that are significantly faster than the one we published in the video, but we respect the gentlemen’s agreement, and to protect our integrity, we don’t publish a time that we can’t verify with a video.” There ya’ go.

On his current job:

Would Oppenheiser ever consider leaving his current post to be the Chief Corvette Engineer? “If I had the opportunity to choose right now between the two, I think I would keep the Camaro job, because I really identify with the Camaro DNA.”

Expect Al Oppenheiser to be in attendance at Belle Isle two weekends from now, where the all-new 2016 Chevrolet Camaro will officially be revealed to the world, and he and his team can excite the world anew.