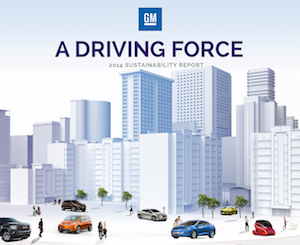 General Motors sustainability report for 2014 attempts to chronicle the automaker’s efforts to make electric and hybrid vehicles more mainstream, implement responsible manufacturing practices and address other prominent sustainability issues in the automotive industry. According to the automaker, its actions outlined in the report will help to “further drive sustainability into the company’s culture,” as the auto industry undergoes a period of major change in coming years.

At the top of GM’s sustainability report is information on its stance towards electric vehicles. The automaker believes “the future is electric,” and took several actions to back up this sentiment last year, including extending the availability of the Spark EV to Maryland and certain Canadian provinces, committing to production of the all-electric Chevrolet Bolt, and giving the all-new 2016 Chevrolet Volt a lower base price than the previous model. It also noted the billions of dollars the company has invested in order to support an “all-in-house” approach to developing and manufacturing EVs.

GM made efforts to make responsible manufacturing practices more prominent at its various facilities around the globe last year. The automaker says it ended use of coal at its North American plants entirely in 2014 and now uses a total of 105 megawatts of renewables, up 66 MW from 2013. It also added a total of four solar arrays to different plants, expanded the use of landfill gasses at its Orion Township and Fort Wayne plants and began using steam generated from local municipal waste at its Detroit-Hamtramck plant.

Expanding on its responsible manufacturing efforts, GM hopes to become the first automaker to have all its manufacturing sites sending zero waste to landfills. It already runs 122 landfill-free facilities around the world and recycled over 2.5 million metric tons of waste and materials in 2014, which is roughly equivalent to 10 million metric tons of CO2-equivalent emissions.

More environmentally friendly efforts GM made in 2014 can be read in detail in the automaker’s sustainability report at this link.