When the first-generation Chevrolet Volt initially launched, there was a fair deal of confusion over how to classify it. GM tended to prefer labels which conveyed the car as a rechargeable plug-in EV with a petrol engine range extender, while many accused the automaker of being disingenuous, as the powertrain technically shares more in common with your run-of-the-mill plug-in hybrid EV.

No doubt, some of you will see this distinction as splitting hairs. But for those who care, the Idaho National Lab recently released data which suggests that the current Chevrolet Volt traveled nearly as many miles average on pure electricity as the most-traveled EV in the United States: the Nissan Leaf. 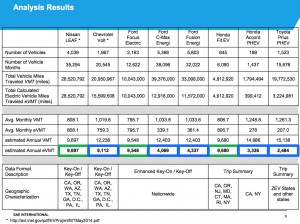 Website Hybrid Cars has the full data presented in a variety of illustrative plots, but from just the table above, you can see that American Chevrolet Volt owners drive the car nearly 95 percent as far on pure electricity annually as the owners of competing pure EVs – the Nissan Leaf, Ford Focus Electric, and Honda Fit EV. Additionally, electric miles make up almost 75 percent of the total miles traveled on average in the first-generation Chevrolet Volt – and the Volt drove 26 percent more miles than the closest EV, the Nissan Leaf.

So clearly, for all practical purposes, data shows that the Chevrolet Volt has been used in the US more like an EV than any other plug-in hybrid; the closest PHEV is the Ford Fusion Energi, with a mere 35 percent of its miles coming from electricity, on average. Why is that? While we can technically only speculate, it seems pretty clear that General Motors did their research when deciding just how large of a battery pack to give the Volt; 40 or so miles is enough to cover the average American’s daily mileage, although with very few miles to spare. Conversely, the Fusion Energi only has around half the electric mileage.

But needless to say, another key is the Chevrolet Volt’s petrol generator. Unlike the so-called “pure” EVs, owners can use 100 percent of the Volt’s electric range regularly because they’ve no fear of being stranded until the fuel tank empties, and they can refuel in seconds. Other EVs don’t have the same luxury, and owners must always consider both how close they’ve gotten to their range limit, and where the nearest charging station is.