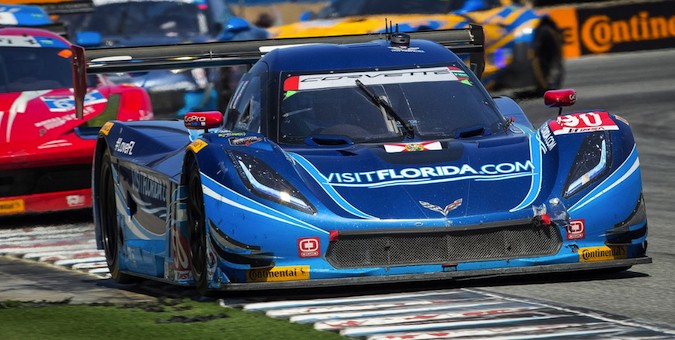 Chevy’s Corvette Daytona Prototype has been dominating IMSA Tudor United Sportscar competition so far this year, and this weekend’s Monterey Grand Prix at Mazda Raceway Laguna Seca was no different. The VisitFlorida.com No. 90 Chevrolet Corvette Daytona Prototype of Richard Westbrook and Michael Valiante drove to an overall win Sunday, beating out Long Beach race winners Jordan and Ricky Taylor in the No. 10 Konica Minolta Corvette DP.

Westbrook crossed the finish line in the No. 90 Chevrolet 1.351-seconds ahead of Taylor in the No. 10 car. The No. 90 held onto the back of the No. 10 for the majority of the race, until the team was able to pass the Taylor brothers’ car during the final green flag pit stop.

“We worked really hard for this,” Westbrook said. “We got out mojo back in Long Beach, and I’m so pleased to get a win with this awesome team.”

In GTLM, Corvette Racing finished a disappointing sixth and seventh, with the No. 4 C7.R of Tommy Milner and Oliver Gavin crossing the finish line about a second ahead of the No. 3 car driven by Jan Magnussen and Antonio Garcia. The No. 3 car’s chances at winning were slim from the get-go, with the car starting at the back of the grid after needing a post-qualifying engine swap. The No. 4 car, meanwhile, was forced to give up two positions when the car in front stalled on the race start. The No. 4 car also suffered a late-race collision with a Prototype Challenge car, according to Corvette Blogger, slightly hindering its performance.

Corvette Racing will attempt to put their performance at Lagun Seca behind them as they head to France for the 24 Hours of Le Mans on June 13-14. The Corvette Daytona prototypes, meanwhile, will head to Detroit to race in the shadow of General Motors’ towering Renaissance Center HQ on Belle Isle the weekend of May 29-31.