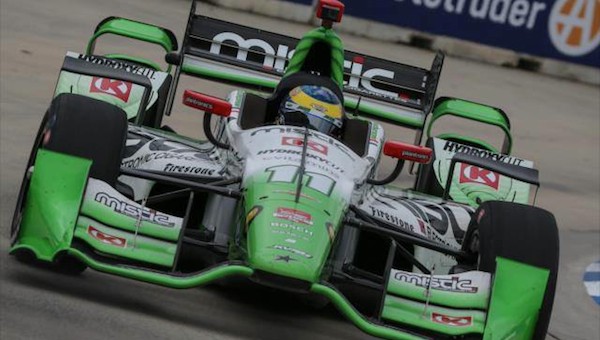 Sebastien Bourdais drove to victory in round two of the Chevrolet Dual in Detroit today, giving Chevy redemption after Honda took the win in the first round of its home turf grand prix. The win is Bourdais’ second in the Verizon IndyCar series and gives him 33 career wins including his Champ Car results.

Rain forced race officials to cancel the second round of the Pirelli World Challenge scheduled for earlier in the afternoon, but luckily for IndyCar, the weather seemed to clear just as they were shuffling onto pit lane for pre-race ceremonies. That didn’t prevent the race from having its series of caution periods, however, with Chip Ganassi Racing’s Charlie Kimball knocking teammate Scott Dixon into the wall and Jack Hawksworth spinning late in the race. Helio Castroneves and Will Power also crashed out, putting out a red flag with 5 minutes and 33 seconds left in the race.

When the race went green with 3:20 to go, Bourdais just barely led AJ Foyt’s Takuma Sato. But by the time lap 66 had rolled around, the Frenchman had extended his lead to over a second and a half, eventually crossing the finish line 1.7644 ahead of Sato. Bourdais was also only getting faster before the checkered flag flew, with his final lap being the fastest of the shortened 68-lap race.

Pole sitter Juan Pablo Montoya, winner of the 2015 Indianapolis 500, led the most laps of the day at 36. His potentially strong result was thwarted when he ran out of gas on the final lap and finished tenth. Thanks to Power’s DNF, the result was enough for Montoya to retain his series’ points lead over the Australian. Scott Dixon remains in third as the IndyCar series heads to Texas for the Firestone 600 on June 6.