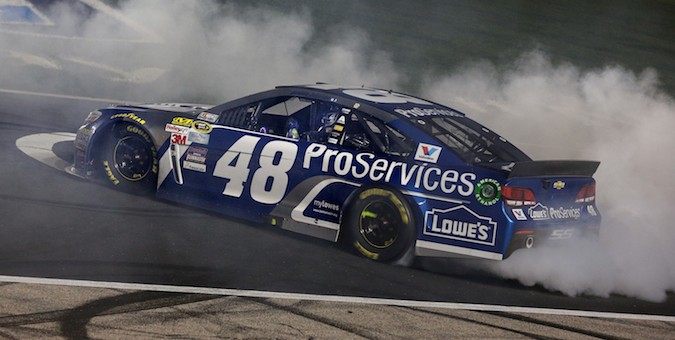 Jimmie Johnson raced to his second win of the season after holding off Kevin Harvick and Dale Earnhardt Jr. in a late-race restart under the lights at Texas Motor Speedway Saturday night.

The win is Johnson’s fifth at Texas Motor Speedway, but his first in NASCAR’s spring race at the track, with his other four coming in the fall round. He and his No. 48 Chevrolet SS took the lead around the halfway mark before leading a race high 128 of 334 laps.

With only 14 laps to go Johnson found himself stuck behind Jamie McMurray and Kevin Harvick. A couple of fast corners saw Johnson pass both Harvick and McMurray on the inside, likely putting the whole Hendrick Motorsports team on the edge of their seats. Johnson would hold off Harvick and Earnhardt for the remainder of the race, leaving the two to battle for second.

Harvick, the current points leader in the Sprint Cup Series, eventually sailed past Earnhardt, but he wasn’t fast enough to catch the strong No. 48 car. The Stewart-Haas racing driver’s bid for first went down the drain when he pushed a bit to hard and scraped the wall, relegating him to third with just three laps to go.

Together, Johnson, Earnhardt and Harvick put three Chevys on the podium. Shuffling in behind them was Joey Logano and Brad Keselowski in fourth and fifth, along with Jamie McMurray in sixth, Jeff Gordon in seventh and Kasey Kahne in eighth.

The next round of the NASCAR Sprint Cup Series will be at ‘The Last Great Coliseum’, Bristol Motor Speedway, for the Food City 500 in Support of Steve Byrnes and Stand Up To Cancer. The green flag is scheduled to wave at 1 p.m. on Sunday, April 19. For now, you can view Saturday’s race highlights in the video below, courtesy of NASCAR.