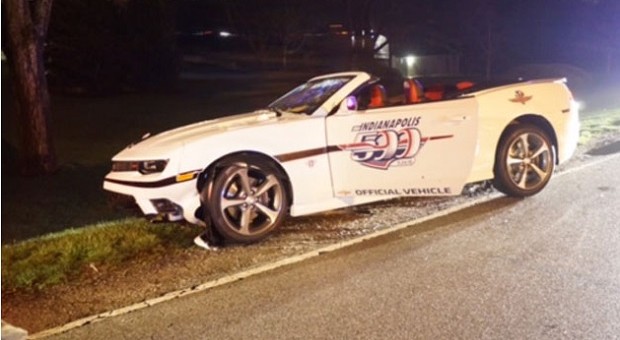 Just three days ago Chevrolet proudly showed off their all-new 2015 Camaro SS Convertible Festival Cars for this year’s Indy 500 by parking them all on the tarmac of the legendary race track. Some of the new Festival Cars were lent to event organizers to promote the annual festivities at the Indianapolis Motor Speedway, some were kept in order to serve as pace cars and some went to dealerships to be sold.

One of those new Festival Cars was given to Bill Estes Chevrolet in Zionsville, Indiana. According to WTHR, a shirtless intruder broke into the dealer late Wednesday night, found the keys to the 2015 Camaro Festival Car, and drove it right through the dealer’s window. The Camaro suffered significant damage when it was slammed through the pane glass and was thus found abandoned just a few blocks from the dealer.

In case you needed any more evidence the perpetrator in question wasn’t the smartest criminal around, he didn’t bother to erect the canvas top before driving through the window.

“There was also blood on the console of the vehicle,” a Zionsville police department spokesman told WTHR. “It was a convertible and he drove it through a big plate glass window so you can imagine how that might injure somebody.”

Unfortunately, there was a ‘Sold’ sticker inside the Camaro when it was found, so one unlucky Zionsville area Chevy enthusiast might never receive their rather rare purchase. Boone County, Zionsville, Indianapolis and Whitestown police said they will conduct additional searches for the suspect today and are encouraging local residents to keep an eye out for anything suspicious.