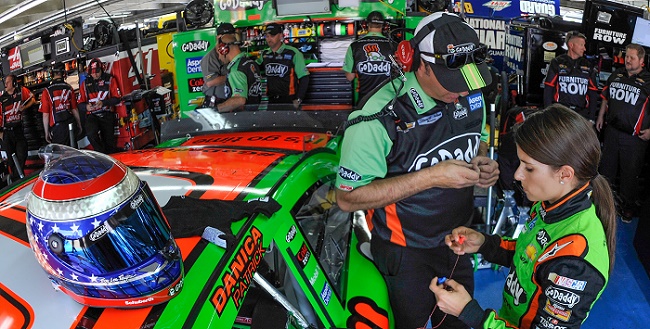 This year marks the end of Danica Patrick’s 3-year deal with Stewart-Haas Racing, and while the team has expressed interest in re-signing her, main sponsor GoDaddy has officially announced theywon’t be continuing their partnership beyond 2015. The announcement comes not long after GoDaddy had its IPO earlier this month and announced it would shift its focus to global markets and small business customers.

According to USA Today, GoDaddy chief marketing officer Phil Bienert said the company hopes it can continue a ‘personal services’ partnership with Patrick, even though it will no longer serve as the main sponsor of her No. 10 Chevrolet SS after this year. Patrick echoed Bienert’s statements, saying the internet domain registrar is an “incredible partner” and that she hopes to continue working with the company.

GoDaddy has elected to end its expensive NASCAR ventures as it directs its attention to a more global audience. Bienert told USA Today the company is “not really in a brand-building phase,” in the U.S. anymore, and based off of data collected, concluded it was “time to shift” away from NASCAR and Stewart-Haas Racing.

Now Patrick must secure sponsorship in time for 2016, a tall task even for one of NASCAR’s most popular drivers. Patrick recently drove cars with TAXAct and Aspen Dental main sponsors and could potentially find a range of sponsors to take up space on her car for different races next season, but finding a main sponsor to front the $16 million-$18 million full-season charge would be ideal.

While there’s uncertainty surrounding her sponsorship next year, it appears as though she has all but secured a spot on Stewart-Haas Racing for 2016 and beyond.

“It is our intent to continue raising our performance bar with all four Stewart-Haas Racing teams and delivering results to our constituents now and in the future,” Brett Frood, executive vice president of SHR, said in a statement. “With Danica, we see a driver with unparalleled resolve and tenacity. She is an individual who transcends the sport and we look forward to fostering new partnerships for her and the No. 10 team.”