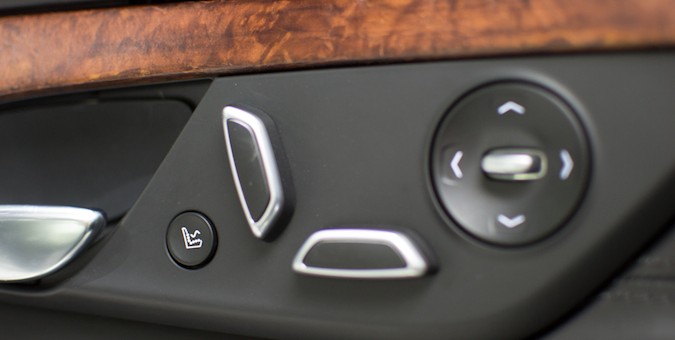 The 2016 Cadillac CT6 has many great features. Things like its 3.0-liter twin turbocharged V6 engine and updated CUE system are welcome additions to the Cadillac portfolio, but as with nearly every car ever made, there’s a few shortcomings, so let’s address them.

1. The Feel And Look Of The Door Mounted Electric Seat Controls

This complaint is the reason for the header image above. Don’t get us wrong, we love that Cadillac decided to use door-mounted seat controls on the CT6, as we’ve always found them to be easier to use than ones mounted beside the seat. Our problem is with the feel and look of the switches. They didn’t feel cheap, but we felt Cadillac could have made them out of higher end materials. Even the 2015 Mercedes-Benz C-Class has metal door-mounted seat controls with a particularly attractive design, and that’s a compact car that starts at $38,400.

2. The Styling, While Beautiful, Is A Bit Underwhelming

The CT6 is a nice looking automobile, no doubt. However we we’re expecting something a little more imposing. We feel as though the CT6 isn’t a groundbreaking and memorable new design like the Elmiraj Concept, but is rather a natural progression from the CTS. Here at the New York Auto Show, we’ve heard the sentence “it looks like a bigger CTS” on more than one occasion. This isn’t a bad thing, but we have a feeling not too many consumers will be buying the CT6 based on looks alone.

3. It Didn’t Debut With The Plug-In Hybrid Powertrain Or Twin-Turbocharged V8

We were fairly excited to see the CT6 prior to its big debut. One of the main reasons for this was the exciting new powertrains on offer. Cadillac has already confirmed the car will arrive with a twin-turbocharged V8 and a plug-in hybrid powertrain using the available 3.0-liter twin turbocharged V6, but only the regular 3.0-liter twin turbo-powered model was in NYC. The CT6 may have made an even bigger splash if it debuted with one of its more impressive propulsion systems, but at least we’ll see them added to its portfolio eventually.

4. If You Want Rear Wheel Drive, You Need The 2.0L Four-Cylinder

Cadillac made sure their CT6 debuted with two exclusive powertrains: The all-new 3.6-liter V6 and the aforementioned 3.0-liter twin-turbo V6. However both those engines are mated to Cadillac’s Active Chassis System, which also includes all-wheel drive. If you want the precision and driving feel a RWD setup provides, you will be forced to pick the 2.0-liter LTG engine also used in the ATS and CTS. This isn’t so bad as the 2.0-liter is fairly powerful and should make for good fuel economy returns, however if you want rear-wheel drive it’s your only option, which could turn a certain kind of customer away.

5. The Look Of The Rear Seat Entertainment System

We feel as though the way the optional rear-seat entertainment system in the CT6 looks is a touch awkward. Rather than using a ‘floating’ screen like Mercedes or BMW, Cadillac’s automatically retracts into the back seat. This is good as you don’t have to constantly look at the screen if you’re not using it, but the whole assembly takes up more space and looks a bit strange. We’re nitpicking at this point, however we can’t help but feel as though they could have integrated it with more finesse.