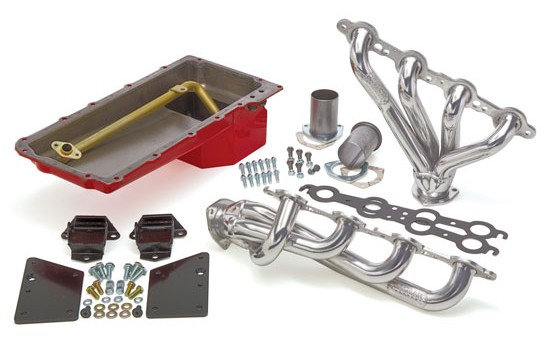 Hedman Performance Group’s sub-brands including Hedman Hedders, Hamburger’s Performance, and Trans Dapt have put together a kit that they’re calling an “LS Swap-in-a-box.” The kit was created in an effort to make life easier for those who want to put some modern-day power in their classic ’64-’67 GM A-Body. For those who may be unfamiliar, A-body cars include the likes of the first-generation Chevrolet Chevelle and Pontiac GTO.

There are two main headaches for an enthusiast who are swapping an LS into their A-Body. The first is that the oil sump of the LS engine is located on the opposite end of the motor as opposed to the earlier small block and big blocks. The second concern is finding headers that will fit right without requiring “clearancing.”

To mend these issues, the kit features the Hedman LS-Swap Pro-Touring mid-length headers which has 1 1/2-inch primaries and a 2 1/2-inch collector to maximize exhaust flow while delivering additional ground clearance for lowered vehicles. The headers were designed alongside the Trans-Dapt motor mounts which are also included in the kit, and make bolting-in the LS-engine very simple while ensuring an exact fit. The third component of the kit is the LS-Swap oil pan designed by Hamburger Performance, which negates the need to modify the factory crossmember since it relocates the sump with an extended pickup tube to match the location of the sump on the earlier small blocks and big blocks.

The oil pan was also designed with lowered vehicles in mind, and is a lower profile than the stock LS pan. It also features two integrated -10 AN fittings to make it easier to remotely mount your oil filter for easy access and even more clearance.

Seems like the LS Swap-in-a-box is a great short-cut for those doing the swap, saving you a lot of time and headaches. To find out more, visit Trans-Dapt’s website. You can also check out Hedman Performance’s website for other details including application availability.