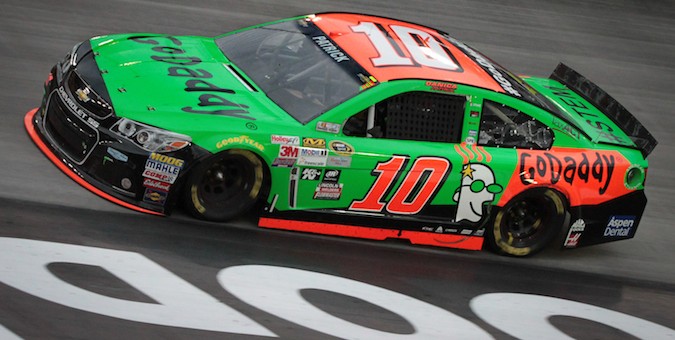 With rain delays and caution flags, Sunday’s Food City 500 in Support of Steve Byrnes and Stand Up To Cancer wasn’t easy for any of the Sprint Cup athletes, including Danica Patrick. The Stewart-Haas Racing driver said she was “hoping for a top 20,” after running 37th in practice, but her day ended up on a much more positive note than that.

Patrick qualified 26th and fell off lead lap pace early on. When the race resumed after a red flag was put out for rain, Patrick managed to move her way into the top 20, a position she would hold until she was just barely collected in a Lap 278 wreck sparked by Kurt Busch. She reclaimed her top 20 spot following the restart and managed to run just outside of the top ten until the final caution was put out.

Starting from 12th for the green-white checkered flag, Patrick was posied for a strong finish no matter what. She fought her way into ninth position on the closing laps and locked down her second top 10 so far this year and the sixth of her career. The milestone also makes Patrick the female with the most top 10s in NASCAR Sprint Cup Series history, a record formerly held by Janet Guthrie.

“I didn’t think this day was ever going to end,” Patrick said post-race. “I’m proud of everybody for keeping their heads up and staying positive and these are the things that happen when you work together as a team. Just keep at it. We had some luck on our side and I really feel like that positivity feeds into getting some luck and being at the right place at the right time. We just were. We came out of here with a top 10.”

Between her top ten finish at Martinsville and Sunday’s finish at Bristol, Patrick is having a strong season so far this year. She’s currently 13th in the points standings after the first eight races and will be looking to bring the forward momentum to the Toyota Owners 400 at Richmond next week.