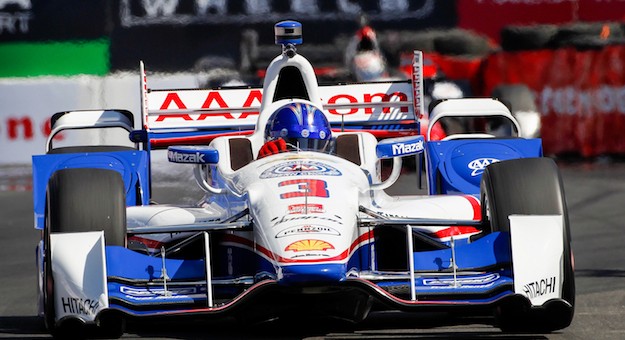 Chevrolet’s aero kit and engine package for the 2015 Verizon IndyCar season has so far proved to be a touch stronger than Honda’s. Chevy powered cars have grabbed pole position at all three IndyCar events so far this year and captured wins at two of the three races, with Juan Pablo Montoya winning at St. Petersburg and Scott Dixon driving to victory at Long Beach. Now, the bowtie is looking for its third win as the series heads to Barber Motorsports Park in Birmingham, Alabama.

The circuit at Barber is a 2.38-mile, 17-turn road course, much different than the tight street circuit IndyCar competed on in Long Beach last week. The permanent course also features 80-feet of elevation change and typically has the highest amounts of grip on the IndyCar schedule, which should make it an interesting venue with this year’s aero kits.

Chevy is optimistic about this weekend’s race at Barber. The automaker has earned two poles at the track since 2012, and Team Chevy’s Will Power is a two-time winner of the Indy Grand Prix of Alabama. Additionally, Team Chevy’s Helio Castroneves, who has been a notable challenger in 2015, won the race at Barber back in 2010 .

“Team Chevy heads into Birmingham, Alabama this weekend bringing solid momentum from a strong showing on the streets of Long Beach,” said Chevrolet Racing Program Manager for the Verizon IndyCar Series, Chris Berube. “Barber Motorsports Park is a beautiful permanent road course with typically the highest grip level on the Verizon IndyCar Series schedule which makes it a bookend venue for assessing road course aero kit performance. Our Chevy IndyCar V6 is dialed in to work together with the Chevrolet Aero Kit to produce reliable power, strategically good fuel economy and effective drivability. Pairing this with the execution levels of the four Chevrolet teams and drivers has us feeling optimistic for a good result on Sunday.”

The green flag will fly in Alabama this Sunday, April 26 at 3 p.m. NCB Sports Network will have the live television coverage, and you can keep up with live scoring on IndyCar’s website or with the IndyCar app.