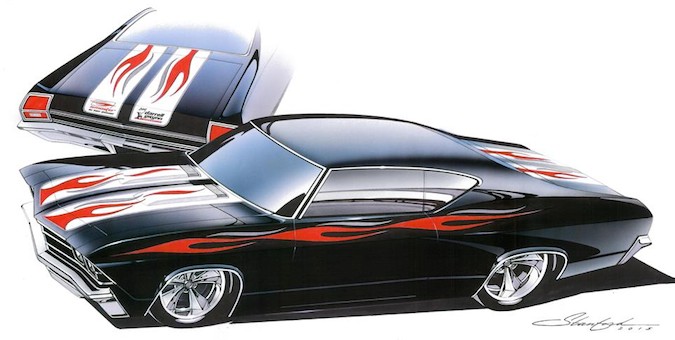 Barrett-Jackson Palm Beach, set to kick of this Friday, will see several different cars auctioned off for charity, including the unique “Smoke” Edition 396 1969 Chevrolet Chevelle.

As its name suggests, the Smoke Edition Chevelle was designed with help from NASCAR driver Tony Stewart, or ‘Smoke’, as he’s known in comes circles. His influence is seen in the flame decals and dual white racing stripes, along with the car’s low, speedy stance. The custom special will also feature wheels donated by Chip Foose and a “custom” 396 V8 engine.

The best part about this NASCAR-influenced Chevelle, though, is all the proceeds will benefit the Darrell Gwynn Foundation and their wheelchair donation program. So not only can you own a fairly sweet new ride, you can rest easy at night knowing all the proceeds went to a great cause.

“This is such an exciting project for me,” Darrell Gwynn, founder of the Darrell Gwynn Foundation, said of the Smoke Edition Chevelle. “We couldn’t have done it would Patrick Hurst of American Classic Rides. Tony Stewart is such an avid automobile enthusiast, so to be able to work with him to design a one-of-a-kind ‘Smoke’ Edition was awesome. I know this is a car that he’d love to drive if he had the chance! The winning bidder is going to get a treasure at Barrett-Jackson Palm Beach, while supporting a great cause.”

Check out the listing for this one-of-a-kind Chevy here, and keep an eye out for it as it crosses the auction block this weekend, as the Darell Dwyn Foundation will also present a custom power wheelchair to an individual living with paralysis following the sale.