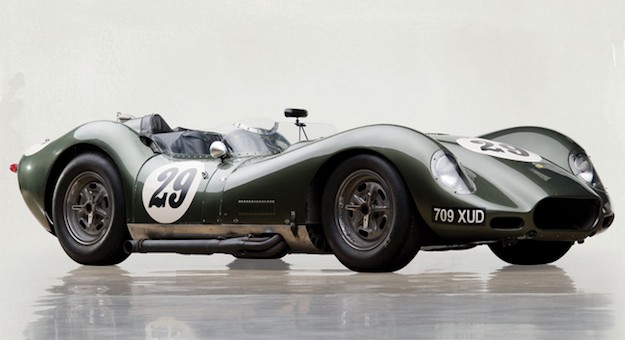 Brian Lister started his own privateer racing company in 1954 and saw immediate success, gaining backing from numerous sponsors including Shell/BP and eventually signing a deal to run Jaguar engines. The Lister-Jaguar combo was a match made in heaven and would utilize the company’s new bodywork which, according to RM Sotheby’s, was nicknamed ‘Knobbly’ for its somewhat bumpy and rough bodywork.

Marrying a Chevrolet engine to a Lister chassis also returned good results for the privateer racing company, with the Lister-Chevy cars taking home back to back SCCA championships in 1958 and 1959. Eventually production came to an end at the end of 1959 and of the 50 ‘Knobbly’ Listers made, just 16 packed Chevy power under the hood.

RM Sotheby’s (formally RM Auctions) is now selling off one of these rare Lister-Chevrolets at their upcoming sale of The Andrews Collection in May. The car, an authentic example as confirmed by its unique chassis stamping, was originally owned by road racers Chuck Howard and Tracy Bird, who ran it in events at Road America and Elkhart Lake, among others. It was then registered by the second owner with the Vintage Sports Car Club of America, before travelling to Europe and changing hands a few times. It was also rebodied by Walter Becker of Switzerland at some point in time.

After a thorough rebuild, the Lister-Chevy won numerous vintage races and titles including the BRDC Championship and the Sussex Trophy at Goodwood twice and also racked up 34 top three finishes. It’s success in modern day vintage races is telling of the winning combo made up by the 435 horsepower Chevy Small Block and lightweight ‘Knobbly’ bodywork.

This Lister-Chevy is set to fetch between $500,000-$650,000 when it sells at The Andrews Collection Auction next month. With the sale, the buyer will recieve, the correct FIA paperwork, a large binder with historical and technical information, and a hoarde of spare parts including a spare engine, a gearbox, and an extra hood panel.